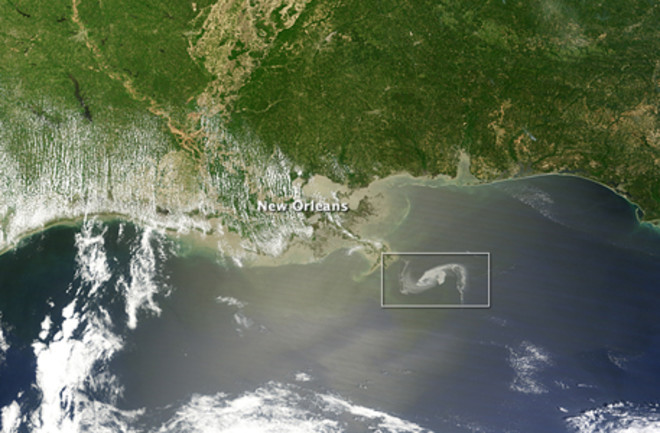 A week from today the Gulf of Mexico oil spill will still be pouring vast volumes of oil into the water. And that still might not be the end of it. That's the latest word from the oil company BP, whose efforts to shut off the leak have met with failure so far, and whose new plan will take another week—if it works at all.

BP PLC was preparing a system never tried before at such depths to siphon away the geyser of crude from a blown-out well a mile under Gulf of Mexico waters. However, the plan to lower 74-ton, concrete-and-metal boxes being built to capture the oil and siphon it to a barge waiting at the surface will need at least another six to eight days to get it in place [AP].

There are presently three leaks that were created when the Deepwater Horizon rig exploded and sank into the gulf. BP says today that it still hopes to install a shutoff valve on one of them, but that's not an option for the others. So the company wants to place one of these "containment domes" on the largest leak in about a week, and then another on the final leak a couple of days after that. But while BP, with help from the military, struggles to stop the flow, some of the environmental consequences are becoming clear already. Over the weekend, the

National Oceanic and Atmospheric Administration announced that fishing would be closed across the Gulf region, from the Mississippi River to the Florida panhandle, for 10 days at least.

The U.S. Gulf coast is a rich breeding ground for fish, crabs, oysters and shrimp and accounts for about 20 percent of the nation's total commercial seafood production. The shrimp and oyster supply, in particular, is heavily concentrated in the Gulf [Reuters].

In addition, crude is now creeping toward the fragile wetlands of the Gulf Coast, and Louisiana in particular. Due in part to pollution, construction, and natural disasters like hurricanes Katrina and Rita, the marsh lands of the Mississippi delta have shrunk drastically; since the 1930s, Louisiana lost an area the size of Delaware to the sea.

Healthy wetlands would have some natural ability to cope with an oil slick, said Denise Reed, interim director of the Pontchartrain Institute for Environmental Sciences at the University of New Orleans. “The trouble with our marshes is they’re already stressed, they’re already hanging by a fingernail,” she said. It is possible, she said, that the wetlands’ “tolerance for oil has been compromised.” If so, she said, that could be “the straw that broke the camel’s back” [The New York Times].

It would be not only an ecological disaster if the oil influx killed off this ecosystem: Compromised wetlands mean less protection for New Orleans against the storm surge brought by hurricanes. On the political side, BP's CEO,

Tony Hayward, has said that the company accepts full responsibility for the spill and would pay up for "legitimate" claims of damage caused by the slick. However, the scope of this spill is so vast that the list of damages may stretch on and on. Already last week Louisiana shrimpers filed suit against BP for endangering their livelihood. If the spill indeed destroys ecosystems on the Gulf coast, the courts will probably have to sort out responsibility for that, too.