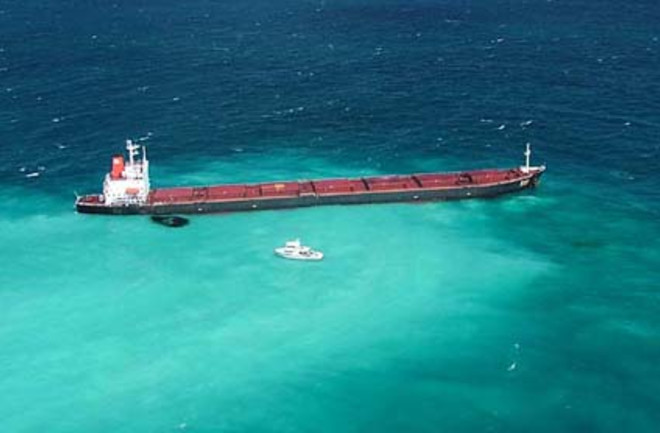 Over the weekend a huge Chinese freighter loaded down with coal and fuel oil crashed into part of the Great Barrier Reef off the Australian coast. Today, salvage teams are still struggling with how to extricate the Shen Neng 1 without dumping any more of its dirty cargo into the delicate marine ecosystem. The ship had left the port of Gladstone just a few hours before striking the reef in Douglas Shoal.

It ran aground in a restricted zone of the marine park, almost 30km [18.6 miles] from the authorised shipping channels it should have been using [Sydney Morning Herald]

. Both the main engine and the rudders sustained serious damage. While rescuers debate how to orchestrate a salvage operation, the Shen Neng 1 has slid another 20 or 30 yards along the reef, destroying more coral in its path. Rushing into a salvage operation, however, could be a disaster. The ship is holding more than 1,000 U.S. tons of fuel oil, and more than 70,000 U.S. tons of coal. Patrick Quirk, the maritime safety manager for Queensland (the province of Australia where this happened) says that two tons of overflow fuel has already leaked out, but the rest, so far, has been saved.

"The oil is being held from the breach tank by a hydrostatic plug of water," Mr Quirk said. That `plug' was caused by the pressure of the ocean water outside preventing the oil and water escaping from the ship's engine room [Brisbane Times]

. Quirk is worried that refloating the ship too soon could kill that pressure plug and cause a much more vigorous oil leak, or worse, cause the ship to break up. Shipping experts like Basil M. Karatzas say

it was not unusual that the 755-foot Shen Neng 1 would be carrying so much bunker fuel. A ship of that size and design would burn about 35 tons of fuel a day, he said, and would require at least two weeks to travel from eastern Australia to China [The New York Times]

. Also, because China imports so much material, ships must be prepared for long waits to unload when they reach port. While the salvage teams commence their work, the Australian maritime investigators have begun trying to ascertain just how the Shen Neng 1 got so far off course in the first place.

The shipping company could be fined $1 million and the ship's captain $250,000 if proven to have broken Australia's shipping laws [Sydney Morning Herald]