Designing buildings that produce more power than they consume. 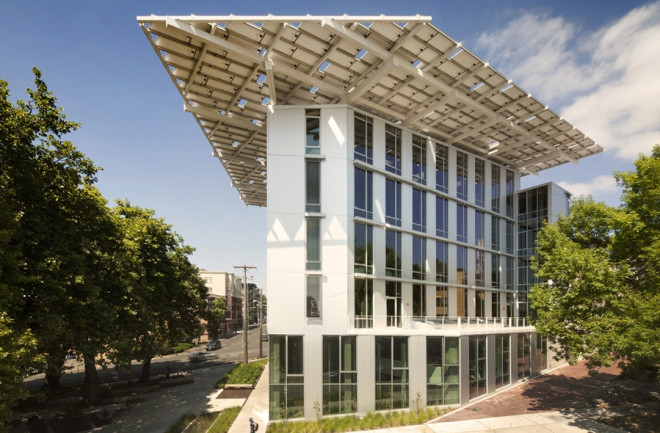 The Bullitt Center is one of the greenest buildings in the world. The office building, which opened on Earth Day, April 22, 2013, generates 60 percent more power than it uses and harvests rainwater to feed bathroom taps. Its parking garage houses only bikes. Benjamin Benschneider, courtesy of the Bullitt Center

Buildings consume 73 percent of the United States’ electricity and produce 38 percent of its carbon dioxide emissions. “We need a change,” says Eric Corey Freed, vice president of global outreach for the International Living Future Institute. The gold standard in energy efficiency, known as net zero, calls for every building to generate 100 percent of the energy it consumes, but Freed believes builders can go further.

Enter the institute’s Living Building Challenge (LBC), a certification program for buildings that aren’t just energy efficient but also regenerative — they produce more power than they use and promote well-being.

LBC projects use smart technology, including thermostats that learn when to turn off the heat and “daylighting,” which allows natural light to permeate the space. The Bullitt Center in Seattle uses both, along with a large solar array extending across an oversized roof, to achieve net-positive results despite the city’s cloudy climate.

LBC also emphasizes cutting carbon emissions across the supply chain. Builders of the Brock Environmental Center in Virginia Beach, Va., used locally sourced materials, as well as salvaged wood and granite, instead of new products that had to be mined and transported long distances. They also purchased carbon offsets to compensate for the carbon pollution they did emit; the funds supported a project that converts landfill gases into electricity.

The LBC green-building model costs slightly more than others; a new LBC office in Washington, D.C., for instance, can run about $202 per square foot compared with $192 for a net zero building. But LBC offers more than just energy conservation, Freed notes. Each building must also be beautiful and promote good health. “It’s not just a rating system,” he says. “It’s a philosophy.”