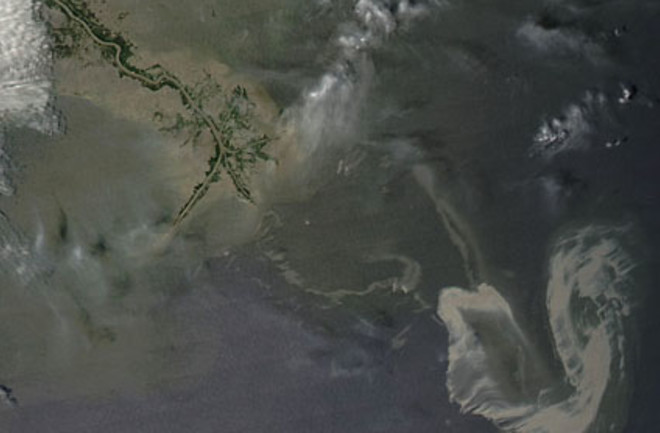 As the oil has continued to leak into the Gulf of Mexico, bad news about the attempts to stop the flow has continued to leak out, too. But this weekend, finally, brought a ray of good news: BP succeeded in installing a mile-long pipe that will siphon some of the oil up to a tanker on the shore, slowing down the rate of oil flow into the water.

The current strategy involves snaking a tube snugly into the leaking pipe. The tube is bent at one end like a hook and equipped with thick rubber fins intended to keep oil from leaking out around the edges [Wall Street Journal].

BP officials say the pipe is working well so far, but they don't yet what percentage of the oil they'll be able to capture with this method. And the siphoning pipe is a temporary solution. As the oil company presses on with the months-long process to drill a relief well to relieve the pressure on the leaking area, its engineers are also hunkered down designing a way to deliver the "junk shot

" made of tires and golf balls that potentially could seal of the leak. Meanwhile, more bad news: We reported late last week that several scientists are now saying BP and the government grossly underestimated

amount of oil leaking into the Gulf. Now, a team working out in the Gulf has backed up that assertion. They found large plumes of oil hidden from normal view, deep under the surface of the water. Samantha Joye, one of the oceanographers on board the research vessel Pelican, says:

The plumes are depleting the oxygen dissolved in the gulf, worrying scientists, who fear that the oxygen level could eventually fall so low as to kill off much of the sea life near the plumes. Dr. Joye said the oxygen had already dropped 30 percent near some of the plumes in the month that the broken oil well had been flowing [The New York Times].

The likeliest explanation for the drop in oxygen levels, says Joye, is that oil-eating bacteria are devouring the plumes, and consuming large amounts of oxygen in the process. Rather than being thick pockets of oil moving deep in the water, these plumes are probably partially dispersed, and some could be the consistency of salad dressing. And their movements have scientists worried that they could spread far beyond the already-large area of the oil slick in the Gulf.

The National Oceanic and Atmospheric Administration warned over the weekend that plumes of oil already spilled and suspended beneath the water surface might, as soon as Tuesday night, start to get picked up by the powerful "loop current." The current could carry the oil to the Florida Keys and beyond, scientists fear [Washington Post].

The coral near the Keys are especially under threat, both from the lack of oxygen caused by the plumes and from the oil itself.

Depending on the oil exposure, they can be smothered by the pollutants or become more susceptible to bleaching, which hinders reproduction and growth. While the warm temperatures of Florida could speed the recovery of damaged reefs there, some problems could be seen for a decade or more. In the deeper reefs in colder water closer to the spill, the damage could last even longer [AP].

Our recent posts on the BP oil spill: 80beats: Scientists Say Gulf Spill Is Way Worse Than Estimated. How'd We Get It So Wrong?