Seth Shostak is Senior Astronomer at the SETI Institute in California, and the host of the weekly radio show and podcast, "Big Picture Science."

The Moon is a ball of left-over debris from a cosmic collision that took place more than four billion years ago. A Mars-sized asteroid---one of the countless planetesimals that were frantically churning our solar system into existence---hit the infant Earth, bequeathing it a very large, natural satellite. OK, that’s a bit of modestly engaging astrophysics. But some scientists think there’s a biological angle here. Namely, that elaborate terrestrial life might never have appeared if that asteroid had arrived a few hours earlier, and sailed silently by. Put another way, if every night were moonless, you wouldn’t be around to notice the lack of a moon. But is that true? Did our cratered companion really make our existence possible? 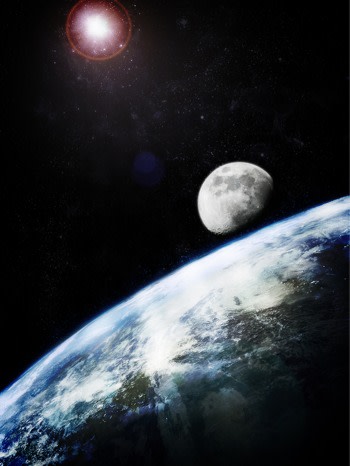 Well, there’s no doubt that the Moon is more than a handy night light and a hair restorer for werewolves. It’s responsible for the substantial amplitude of earthly ocean tides. These are of obvious influence if you’re a geoduck, a type of clam that people dig up at low tide. But even if the Moon didn’t exist---even if it had been vaporized billions of years ago by cantankerous Klingons---there would still be (somewhat lower) tides raised by the Sun. For creatures dependent on the oceans’ ebb and flow, life could go on. However, the Moon does something else that might be of greater significance: It stabilizes the Earth’s spin. In other words, it keeps the rotation axis tilted at roughly the same angle relative to the plane of our orbit around the Sun. This tilt is about 23 degrees, a fact once known by school kids. If the Earth were in deep, deep space, the tilt---which is called “obliquity” by cognoscenti---would never vary. But our world has neighbors; in particular, the Sun and the other planets of the solar system. Because the Earth is not a perfect sphere (it bulges a bit at the equator, much like most men over 40), these neighbors torque our world with their gravitational pull, causing our spin axis to change. The strongest effect is due to the Sun. But our path around the Sun is endlessly repetitive. So while Sol will change the direction of our planet’s spin, it doesn’t change the tilt angle. On the other hand, the arrangement of the planets relative to Earth doesn’t repeat. Consequently, the effect of their torques can build up, and lead to a dramatic “tipping over” of our planet. The unpleasant consequence would be climate havoc. Enter the Moon. It’s not as big as the planets, but it’s a heck of a lot closer, so its effect on the Earth really counts. Over the course of a month, it pulls first one way, and then the other. And since this cycle occurs over and over, it serves to overwhelm the long-term chaos that the planets would otherwise wreak. The Moon stabilizes Earth’s obliquity. Well, almost. The tilt actually varies between 22 and 24.5 degrees---and the variation is enough to induce such environmental inconveniences as the occasional ice age. Without the Moon, it might be much worse. Consider Mars, whose own moons are puny. The Red Planet suffers swings in tilt that range from 11 to 45 degrees. A moonless Earth, some scientists say, would have polar caps wandering like feral cats---greatly, perhaps fatally, inhibiting the evolution of complex life. OK, but so what? After all, we do have the Moon. Yes, but our moon is an accident, a fairly improbable one. Of the habitable planets around other stars---planets that are similar in size, composition and temperature to Earth---few will boast a natural satellite similar to our moon. Therefore, if a large moon is really crucial for big-time biology, we shouldn’t expect a lot of sophisticated cosmic company. A dozen years ago, the popular book Rare Earth listed a big moon as one of the very special features of our planet, and one essential to the evolution of intelligent beings. However, some recent work by NASA scientist Jack Lissauer and his colleagues paints a more propitious picture. They’ve run computer simulations of Earth’s spin to see how it would behave if there were no Moon. The simulations were done hundreds of times, because the various gravitational effects---with small torques building over time---cause the system to be chaotic. A slightly different initial arrangement of planets, or tiny perturbations, such as a small meteor hitting the Earth, could change the situation significantly millions of years down the road. This is somewhat like the proverbial butterfly whose flapping wings eventually cause thunderstorms on the other side of the globe. The simulations were a big undertaking, but the results are in: Without our moon, we would, indeed, suffer larger swings in Earth’s tilt. But here’s the good news: Even over the course of hundreds of millions of years, these swings are not fast and traumatic. Lissauer’s team reckons that the tilt of a moonless Earth would be stable enough, for long enough, to allow complex life to gain a claw-hold, or at least to adapt to new environmental circumstances when the poles moved. Bottom line? Those who search for life in space can take heart. For an Earth-like planet, a large moon is helpful, but not essential. Unless, of course, you’re a werewolf.