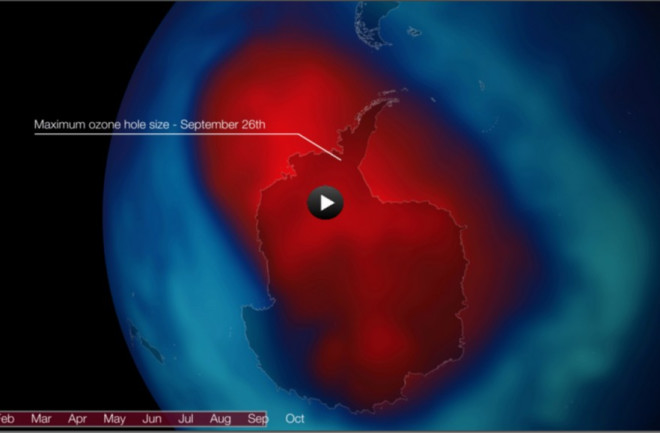 A screenshot of an animation showing the evolution of the Antarctic ozone hole this year. Click on the image to watch the animation. (Source: NOAA Environmental Visualization Laboratory) The good news is simple: The hole in the ozone layer that opens above Antarctica annually was a little smaller this year. Chlorine from human-made chemicals called chlorofluorocarbons began depleting the ozone layer most severely over Antarctica back in the 1980s. This was a big deal because natural ozone in the stratosphere shields life on Earth from the sun's harmful ultraviolet rays. Most ozone-depleting chemicals have been phased out, but they are so long-lasting in the atmosphere — some last for 100 years — that ozone depletion has continued. In a press release, NOAA's Bryan Johnson explains the significance of this year's somewhat smaller Antarctic ozone hole: "We cannot say that this represents recovery, but it is certainly good news to see this year on the higher side of the average ozone range." The screenshot at the top of the post is from an animation by NOAA's Environmental Visualization Laboratory showing the evolution of the ozone hole over Antarctica this year. It reached its maximum size in September.