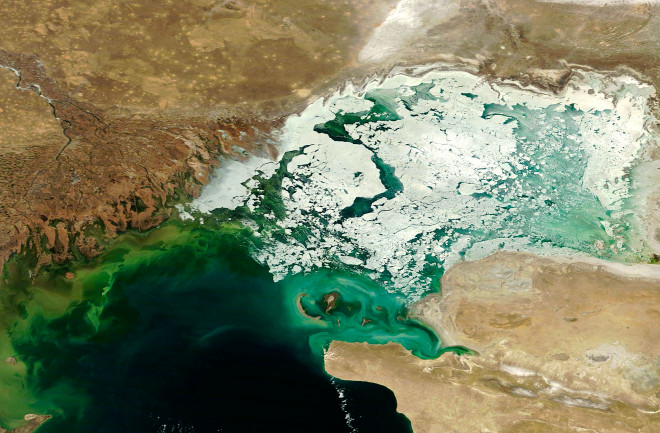 NASA's Terra satellite captured this image of the Volga River Delta and ice covering the northern end of the Caspian Sea on March 7. (Image: NASA EOSDIS Worldview) I go to NASA's online Earth Observatory almost every day to check out the beautiful remote sensing imagery they post there. But here at ImaGeo I usually try to find images that aren't likely to get that kind of exposure, or which illustrate something related to an accompanying story. Today I'm making an exception. Sort of. I found this afternoon's Earth Observatory post of an image of the northern end of the Caspian Sea particularly compelling. But rather than download the EO image, I located the scene myself using NASA's fabulous Worldview web site. And then I did a little processing to enhance the details. Check out the Earth Observatory image, and then compare it to the one at the top of this post. In case you're interested, I adjusted the tonal luminance of the image to more closely match how the eye might have perceived the scene. (For more information about this kind of adjustment, go here.) I also added some definition, or local contrast, and a small amount of sharpening, to help bring out the details in the river delta and ice. Lastly, I gave a small boost (10%) to the saturation and luminance of the greens, to bring out some of the near-shore details. If you're so inclined, leave me a comment below to let me know what you think of the result. For a detailed explanation of why the northern end of the Caspian Sea (which is actually a large lake) was ice covered, whereas the southern half was not, see the Earth Observatory article. Suffice to say that the southern end is up to 3,000 feet deep, and is considerably saltier than the much shallower and fresher northern end, making ice formation there more difficult. I'll leave you with one more piece of eye candy:

A screenshot of a Google Earth remote sensing image. (Image: Google Earth, © DigitalGlobe) It's from the same region as the top image. Can you find where it is?