A premature melt-out has replenished reservoirs, but with a drying La Niña probably coming, California's water woes are far from over

In this animation of images from NASA's Terra satellite, the snowpack in California's Sierra Nevada range all but vanishes between April 2 and June 7, 2016. (Images: NASA Worldview. Animation: Tom Yulsman) After El Niño failed to deliver salvation from California's epic drought, it has now come to this: Statewide, snowpack is down to just 6 percent of normal for this time of year. For all intent and purposes, this vital source of water for tens of millions of Californians, and one of the world's most productive agricultural economies, has vanished prematurely. The culprit: a sunny and warm spring. And with La Niña probably on the way, things could get worse before they get better.

That's the bad news. The sort of good news is that while El Niño didn't bring salvation, it did bring a fair amount of relief. Statewide, snowpack this past winter pushed up above 80 percent of normal, with much of the relief occurring in the northern part of the state (but leaving the south dry). Once the snow started melting out, water flooded into reservoirs. As a result, major California reservoirs were at 87 percent of capacity on June 14, according to the California Department of Resources. That's way better than at the same time last year, when storage had dwindled to an average of 59 percent of normal. 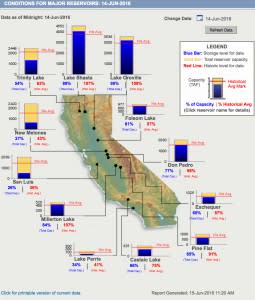 Source: California Dept. of Water Resources Even so, not all reservoirs are brimming. Far from it, as the map at right shows. (Click to enlarge it.) Moreover, warmer temperatures bring increased evaporation from reservoirs. The premature melt-out of California's snowpack this spring also gives us a glimpse of what we should probably expect in coming years: As human-caused warming progresses, more snow will fall in the mountains as rain instead, and it will melt-out earlier and faster, just as happened in California this spring. In turn, this will throw out of whack hydrologic systems designed with plentiful and long-lasting snowpack in mind. In California and elsewhere in the West, snowpack is supposed to serve as a giant reservoir that can provide a steady source of meltwater during the dry months of summer and fall.

I created the animation at the top of this post to show what has happened this spring in California's Sierra Nevada mountains. The first image in the animation was acquired by NASA's Terra satellite on April 2, 2016. At that time, the Sierra Nevada, which runs diagonally through the middle of the frame, was covered in white. The water content of the snowpack at that time stood at 84 percent of normal for the date. (A whole lot more than that was needed to make a major dent in California's drought.) The second image was acquired by Terra on June 7. I chose that date because of the lack of clouds and the high quality of the imagery. There's still some some white stuff visible, but snow water content was down to 13 percent of normal. And by June 13 — less than a week later — the snowpack had plunged to just six percent.

Source: National Centers for Environmental Information The map above shows a big part of the story of what caused the snowpack to melt out so quickly. In California, the average temperature during spring (March through May) was the 13th warmest out of 122 years in this record. In May, conditions moderated a bit. But even so, the average temperature in California during the month was in the top third of warmest months.

Given the latest La Niña forecast, Californians should brace themselves for the possibility of warm and dry conditions next winter, and beyond. In its latest update, the U.S. Climate Prediction Center pegs the odds of La Niña of becoming established in the fall and winter at 75 percent. La Niña tends to bring drier than normal conditions to California — and this can linger for many months even after the La Niña has faded.

SEE ALSO: La Niña tends to cause drying in California, and it often persists — and deepens — for years afterward

The latest forecast favors a weak to borderline-moderate La Niña. But the great vanishing act of California's snowpack, and the following map, both suggest that this could be cold comfort: 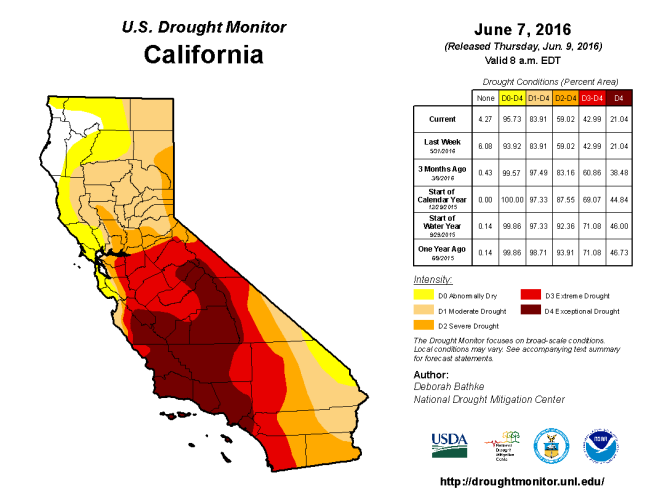 With 84 percent of California still in drought — and a fifth of the state experiencing exceptional drought — even just a moderately dry winter during 2016 and 2017 would be bad news. We can hope that La Niña will fail to live up to expectations, just as El Niño did. Nature sure does have a way of surprising us in that way. But unfortunately, nature could bring a different sort of surprise as well...