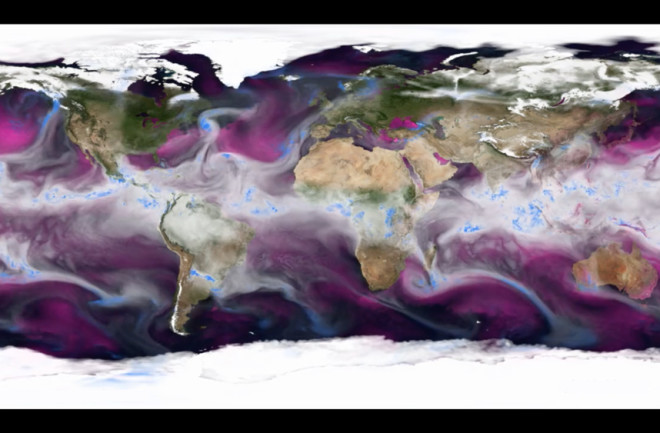 A new animation shows global weather patterns for a 3-month period in 2014. (Credit: BCCR/ECMWF/NASA/MET Norway) A mesmerizing new animation from a climate researcher in Norway shows how global weather patterns unfurled across the world, bringing droughts, cyclones and blizzards with them. Mats Bentsen used climate data from the European Center for Medium-Range Weather Forecast and images from NASA’s Earth Observatory to create a stunning visualization of moisture transport across the Earth from September 1 to November 30, 2014. Colorful Patterns In the animation, white indicates moisture content, usually in the form of clouds, blue shows precipitation and pink denotes evaporation. When you press play, look for the daily flashes of pink across the continents as the sun heats and cools the atmosphere, especially in Africa and India. You'll also see a lot of pink activity in the south-eastern Atlantic and eastern Pacific oceans as water evaporates from warm ocean currents.

Tropical trade winds blow in a band across the equator, spinning off cyclones and storms, which wisp away and scatter into westerly currents. Tenuous bands of moisture slowly gather and are swept up by low-pressure systems as they blanket the planet with rain and snow. Meanwhile, sea ice creeps and retreats around the poles while snow drapes North America, Europe and Asia. Big Impact Major weather events from the year also show up as blips on the map. Keep an eye out for tropical cyclones near Japan and in the Indian Ocean during September and October, including the cyclone Hudhud, which swept across India and deposited snow across Nepal on October 15. The early blizzard and accompanying avalanches killed 20 people. From October 26-28 you can clearly see an intense band of rain pass over Norway, an event which caused severe flooding and resulted in hundreds of residents being evacuated. A week later, snow was deposited in an oddly straight line across the country.