With an El Niño nudge, January saw record high temperatures. But accumulating greenhouse gases are the long-run cause of global warming. 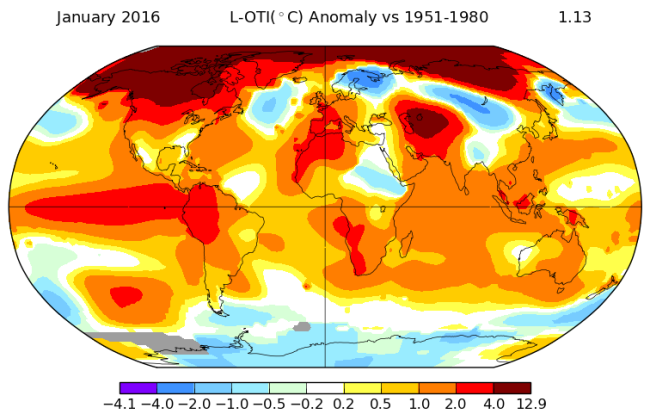 The pattern of temperature anomalies around the globe in January shows particular abnormal warmth in the high northern latitudes, across Canada, Greenland and Siberia. Overall, the global average temperature was 1.13 degrees C, or slightly more than 2 degrees F, warmer than the long-term average. (Source: NASA Goddard Institute for Space Studies.) | Two updates, 2/16/16. See below. | January saw an extraordinary, record-setting spike in global average temperature, according to the just released monthly analysis from NASA's Goddard Institute for Space Studies. The global average temperature at Earth's surface for January 2016 was 1.13 degrees C above the 1951-1980 average. That's slightly more than 2 degrees F. The previous record for January, set in 2007, was .95 C, or 1.71 F above average. NASA's climate record goes back to 1880. The super El Niño pattern that we're still in right now hit a peak in January, and that no doubt played a role in this global temperature spike. You can see it's direct influence in the form of that spear of very warm Pacific Ocean water jutting out from South America along the equator, with associated warmth over the continent itself.

SEE ALSO: If a La Niña follows the current super El Niño, it will probably be bad news for drought-plagued California

But as Thomas R. Karl, director of NOAA's National Centers for Environmental Information, pointed out in a recent press briefing about 2015, which itself turned out to be record warm:

The trend over time is why we’re having a record warm year.

El Niño does cause global average temperature to spike. But the spike for this month, and for all of 2015, came on top of the long-term trend, which looks like this:

Source: NASA GISS The black line in the graph above shows the annual mean temperature anomaly, and it takes us only through 2015. So it does not include January 2016. But the overall trend is clear. The red line showing the 5-year running mean smooths out the year-to-year natural variations — like those caused by warm El Niño phases (1997/1998, for example), and cool La Niña phases (1999/2000). As a result, it shows the long-term trend even better. 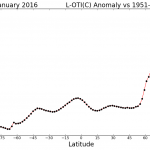 Source: NASA GISS The map at the top of this post shows that extreme warmth in the high latitudes of the Northern Hemisphere played a key role in driving global temperatures up in January of 2016. So does the graph to the right. (Click to enlarge.) It shows how temperatures departed from the long-term average along each band of latitude. To the extreme left in the graph is the South Pole (where the United States has a base). From there to about -60 degrees latitude, temperatures were actually a bit below normal. The map above shows this too. Continuing toward the right — meaning farther and farther north — a sudden jump in temperature occurs at about 60 degrees north. That's about the same latitude as Achorage, Alaska, and Oslo, Norway. (The Arctic Circle is at 66.56, and the North Pole at 90.) | Update 2/16/16: Remarkably warm temperatures in the Arctic during January have been linked most directly to a phenomenon involving differences in air pressure over the Arctic and lower latitudes. Known as the Arctic Oscillation, or AO, it went strongly negative in January, yielding higher atmospheric pressure over the Arctic and lower in the mid-latitudes. (Click here for side-by-side graphics from the National Snow and Ice Data Center showing the air pressure and temperature patterns.) As a result of the strongly negative Arctic Oscillation, cold polar air was able to spill south. Meanwhile, the pattern of high and low pressure systems tended to pump relatively warm air up into the Arctic. (Update ends here.)| Over the long run, warming in the Arctic has occurred about twice as fast as the rest of the globe. This is believed to result from positive feedbacks on temperature. Chief among these feedbacks is one involving Arctic sea ice. Here's how it works: Warming of the atmosphere resulting largely from our emissions of greenhouse gases has caused Arctic sea ice to retreat in extent. The result: increasing amounts of dark sea water are exposed. In summer, sunlight that would ordinarily bounce off bright ice and snow now strikes the increasing extent of open water. Dark surfaces are very good at absorbing energy, so waters warm. And some of that warmth is re-radiated into the atmosphere, thereby magnifying warming in the Arctic. Amplification of human-caused global warming has caused significant ecological impacts in the high north, as well as impacts on local, indigenous communities.

SEE ALSO: Whispers of ecological change in the Arctic are trying to tell us something. Are we listening?

"Indigenous peoples are running out of time and are having fewer opportunities to adapt to changes," said Aili Keskitalo, president of the Sami Parliament of Norway, speaking at the 2016 Arctic Frontiers conference in Tromsø, Norway. The Sami people have been reindeer herders, and their traditional livelihoods are now threatened by a warming climate. I've emailed several experts to get further explanation and commentary about January's record-setting global temperature. As soon as I hear from them, I'll update this post. So please check back. | Update 2/16/16:  After January's analysis was released by NASA's Goddard Institute for Space Studies, I emailed a few questions to the director, Gavin Schmidt. I asked him how he would describe the record-setting month, and the possible roles El Niño and other factors. I didn't ask anything about climate change. He got back to me today, and here was his response:

We generally don't comment on single months because there is a lot of variability there and our main focus is on the long term trends, not the vagaries of weather. For short term variability you are better off talking to meteorologists, not us.

So here's my take: NASA GISS is funded by taxpayer dollars to do these analyses, and it makes them public every month. By not providing any expert guidance in interpreting what the data mean, GISS scientists are missing an opportunity to do public education that would prevent just the sort of misinterpretation they may well fear. I also don't believe any of my questions were beyond Gavin Schmidt's expertise. That said, his reply did get me to thinking about the way I handle weather, on the one hand, and climate on the other. As a science journalist who writes about these issues very often, I find that it is all too easy to forget to make the distinction crystal clear. I also worry that writing about each monthly report could be misleading. A single month does not constitute climate. Twelve months times 10 (a decade) does. By focusing on such a small time period — four weeks — am I helping to sow confusion on this issue? I surely do not want to. In this post, I did try to put the monthly report on global temperatures into the context of the long-term trend. And I also tried to explain proximate meteorological factors, such as the Arctic Oscillation. I thought I was finding the right balance between explaining weather and providing the long-term climatic context. But perhaps I need to do better. With all of this in mind, I'm thinking about doing an entire post on weather and climate — an explainer that could help us all sort out the complexities. We'll see. In the meantime, please weigh in with your own thoughts below. I have just one request: Feel free to criticize me, but no ad hominem attacks please — on me or anyone else. Stick to the issues at hand. Be civil. And I will be grateful. |