Result for 2015 overall likely to be the same

This graph from the Japan Meteorological Agency shows how the global average temperature during each December (dark circles) varied from the long-term average. As the graph shows, global average temperature in December 2015 was by far the warmest for the month in the record, which dates back to 1890. (Graph: JMA. Globe: earth.nullschool.net. Mashup: Tom Yulsman) The first verdict on just how warm the globe was during December of 2015 is now in. And while it is not surprising, I still gasped when I saw it. As the graph from the Japan Meteorological Agency above shows, global warming last month really did blow the previous record for December right out of the water — which was astonishingly warm itself (speaking of the oceans here), as the underlying image suggests. The graph shows how the global average temperature in December, measured across land and sea surfaces, varied from the long-term average for the month. By the JMA's calculation, it was 0.67°C above the 1981-2010 average, and 1.05°C above the 20th century average — the warmest by far since 1891. Here's how temperature anomalies varied in December across the globe: 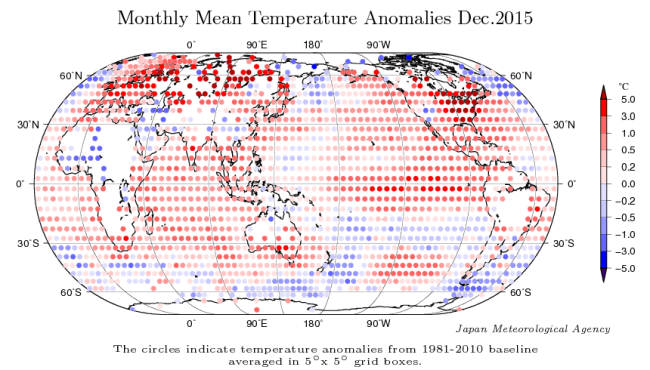 There is no question that exceedingly warm waters along the equator in the Pacific Ocean contributed to December's record warmth for the month. These are associated with the ongoing super El Niño.

SEE ALSO: Had enough meteorological mayhem? Sorry, thanks to El Niño, things are likely to get even worse

But the map also shows that other parts of the Pacific were exceedingly warm too, as was the entire Indian Ocean and parts of the Atlantic. On land, the remarkable warmth experienced across the eastern half of the United States really stands out. And look at that swath of red from Europe all the way across Russia. I think this graphically illustrates a sobering fact: El Niño's impact is coming on top of significant global warming from human activities. The Japan Meteorological Agency still has not yet calculated a final result for the entire year. And NASA's Goddard Institute for Space Studies should publish its own independent findings very soon, followed by the National Oceanic and Atmospheric Administration. So check back here. Meanwhile, El Niño is still going strong, and while it is now expected to weaken gradually in spring and summer, it's impact on global temperature will very likely continue to be felt in 2016.