Global Warming Could Bring a Surge in 12 Deadly Diseases 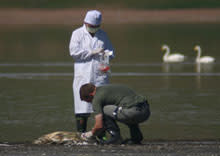 A warmer world will also be a sicklier place for both animals and humans, according to a new report from the Wildlife Conservation Society (WCS).

The report spells out how global warming is changing the ranges and habitats of animals that carry these infectious diseases, bringing the ticks that transmit Lyme disease and the mosquitoes that carry yellow fever and Rift Valley fever into contact with new human populations.

"We've seen Lyme disease work its way up from the US into Canada, and West Nile fever as well," said William Karesh, director of WCS's global health programmes. "Basically what you have now are fewer frozen nights in this region, and that allows the ticks and mosquitoes that carry these diseases to survive further north" [BBC News].

The predicted surge in infections wouldn't be entirely driven by rising temperatures, according to the report. Global warming is also expected to cause an increase in severe weather events, like harsh winter storms or prolonged droughts, which could disrupt normal animal behaviors and spread disease: For example, a drought could bring wild birds carrying avian flu to the water sources provided for farmed poultry. And while the animal host of the dangerous disease Ebola is not clear, outbreaks in central Africa are thought to be correlated to unusual variations in rainfall patterns. To counteract these health threats, WCS suggests an international monitoring program to determine how global warming is affecting the animals that carry these diseases. The

Global Avian Influenza Network for Surveillance (GAINS)—an international effort to monitor bird flu in wild and domestic birds—has helped map how the disease spreads, and helped prevent a major outbreak in humans. Karesh and his colleagues argue that this bird flu network should be transformed into a broader effort that surveys all wildlife diseases. "The GAINS mapping and database systems can be easily adapted to any disease in any species," Karesh says [Scientific American].