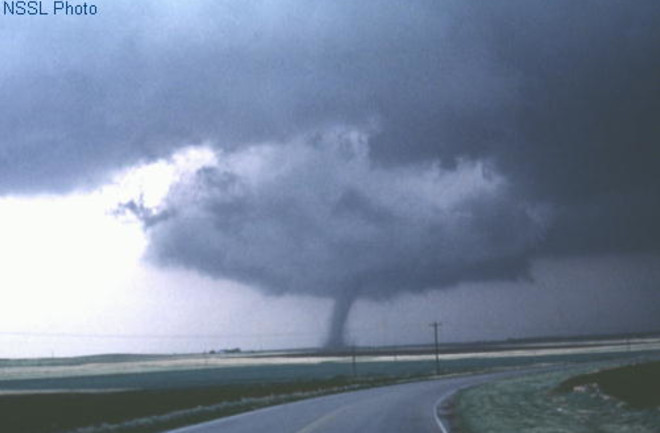 Following the incredible recent destruction from tornadoes in Florida, it seems appropriate to do a brief post about whether there's any significant global warming-tornado relationship, or at least, any relationship that we can confidently discuss at this point in time. I particularly want to address this topic because it's one where, sadly, my own intellectual allies have left themselves vulnerable. In An Inconvenient Truth, Al Gore threw in the 2004 U.S. tornado season in his laundry list of phenomena apparently related to climate change: "Also in 2004, the all-time record for tornadoes in the United States was broken." Incidentally, for this quotation I am relying on the Competitive Enterprise Institute's takedown (PDF) of Gore's movie. I really hate to do that, but in this case--at least on this individual point--CEI seems to have found a weakness in Gore's presentation. Why would Gore throw in the mention of tornadoes, except to imply some sort of causal connection between the 2004 season and global warming? As I recall the movie, Gore didn't make any specific causal claim, but again, why else include the topic if not to suggest the existence of one? And yet now, here comes the IPCC Fourth Assessment Report Summary for Policymakers (PDF), which clearly states:

There is insufficient evidence to determine whether trends exist in the meridional overturning circulation of the global ocean or in small scale phenomena such as tornadoes, hail, lightning and dust-storms.

If there's no documented trend in tornadic activity at this point, then of course we cannot claim that climate change is directly affecting tornadoes. There may well be theoretical reasons for thinking that there would be an impact (I'm not sure what those would be, but then, this isn't my area). But in the absence of even a documented trend, much less a successful causal attribution, we need to be very cautious about how we discuss this subject. And I just can't see how Gore's statement in An Inconvenient Truth would fit this standard. Again, I point this out because it makes me very unhappy when my own intellectual allies leave themselves vulnerable, as Gore has apparently done in this case. And while we're at it, allow me to note that Barak Obama has also made a similarly incautious statement on tornadoes. In Obama's case, though, I can't help wondering whether the error is rooted in popular confusion over the difference between hurricanes and tornadoes. Incidentally, and just to make things still more complicated, hurricanes also spawn tornadoes, so if global warming is affecting hurricanes....but, well, that's another issue.