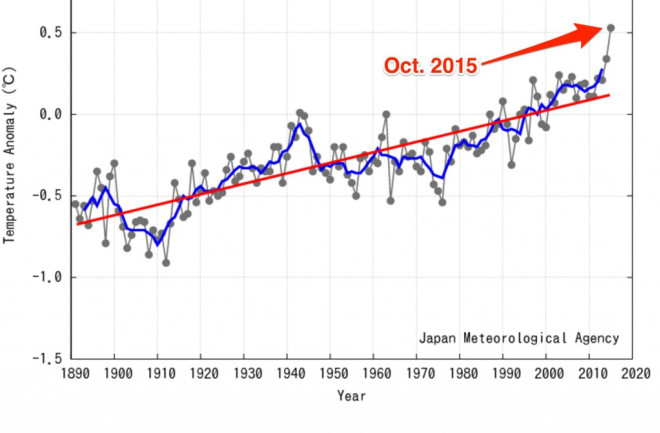 According to the Japan Meteorological Agency, the global average surface temperature in October 2015 (over land and oceans) was +0.53°C above the 1981-2010 average (+0.85°C above the 20th century average). This was the warmest October since 1891. (Graph: Japan Meteorological Agency) The first of several monthly climate analyses for October is out, and the news is sobering: Global average temperature across the land and seas skyrocketed compared to previous Octobers, shattering the previous record for warmth set just last year. According to the Japan Meteorological Agency, this past October was the warmest in a record stretching back 1891, with a global average temperature for the month coming in at 0.85°C above the 20th century average. In the United States, NOAA and NASA will be coming out soon with their own independent analyses of the climate in October 2015. In the meantime, check out this prediction for where we'll wind up at the end of the year, posted to Twitter by Gavin Schmidt, who directs the center in charge of NASA's global climate dataset: https://twitter.com/ClimateOfGavin/status/663800986796998656/photo/1?ref_src=twsrc%5Etfw Schmidt concurs with Britain's Met Office, which last week announced that 2015 would likely be the warmest year on record, with the global average temperature exceeding 1 degree C for the first. As Eric Holthaus put it in a post at Slate last week, "That figure is halfway to the line in the sand that scientists say represents 'dangerous' climate change and global leaders have committed to avoid—an ominous milestone." Global average temperature seems to be following the script written by the El Niño now underway. El Niño tends to increase global temperatures, and this one may go down as among the top three on record.

SEE ALSO: Waiting for El Niño: Is he finally getting ready to blast North America?

But this year's El Niño warming is on top of what has occurred over the past century thanks to our emissions of carbon dioxide and other greenhouse gases. Negotiators from around the world will be gathering in Paris at the end of the month to try to reach agreement on measures to limit global warming. The French government has announced that the talks will continue despite the terrorist attacks on Friday that killed 129 people. But the “concerts and festivities” planned around the talks will not occur. How that will affect attendance is still unknown. About 40,000 people had been expected to attend.