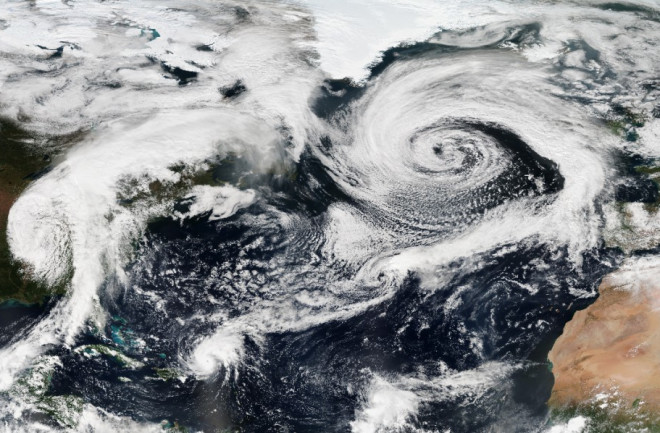 A massive storm with winds as strong as a hurricane swirled in the North Atlantic Ocean between North America and Europe during the week of October 12, 2014. The storm is visible in the upper right quadrant of this image, acquired by the Suomi NPP satellite on Oct. 15. (Source: NOAA) As attention focuses on Hurricane Gonzalo, now expected to batter Bermuda on Friday, a truly gargantuan storm that roiled the North Atlantic with hurricane strength winds earlier this week has, well, slipped through the cracks. You can see it in the image above, acquired by the Suomi NPP satellite on Wednesday. Although its fierce winds spanned a significant portion of the North Atlantic Ocean, churning the waters so violently that waves towered as high as 50 feet, it had no name. That's because it was not a true hurricane. Passengers on commercial flights that had to divert around the worst of the storm to avoid turbulence might have been vaguely aware of it. But for the most part, it has escaped attention. Which is why I thought I'd feature some imagery of this monster here at ImaGeo.

An animation of images from the Suomi NPP satellite shows the evolution of a giant, hurricane force storm that ultimately stretched across a significant portion of the North Atlantic Ocean. The animation also shows the fate of Tropical Storm Faye, and the birth of Hurricane Gonzalo, which now poses a serious threat to Bermuda. (Source: NOAA) The animation above consists of Suomi NPP images starting on October 10th and carrying through to yesterday. I've marked Tropical Storm Faye, which swirled through the Atlantic earlier this week (causing damage to Bermuda), as well as Hurricane Gonzalo, just as it was picking up steam. As you watch the animation, compare the size of Faye and Gonzalo to the evolving nameless storm to the north. No comparison... Andrew Freedman, my colleague at Mashable, explained this storm system well:

Rather than getting its energy from warm ocean waters, as tropical storms and hurricanes do, this non-tropical storm system derives its power from differences in temperature and moisture content between air masses, as well as energy from the upper atmospheric river of air known as the jet stream. It is, in meteorological parlance, a "baroclinic" weather system — use that at a party, it will impress your friends. (OK, maybe not.)

A visualization of the North Atlantic's gigantic hurricane-force storm, based on supercomputer forecasts. (Source: http://earth.nullschool.net/) The image above is a visualization based on forecasts by supercomputers. It shows the storm on Tuesday, Oct. 14. The swirling colored lines are indicative of winds at the surface — and the brighter the lines, the stronger the winds. It was big, and at its heart it was as strong as a hurricane. But by the time its remnants reach Europe on Friday and through the weekend, it will have dissipated quite a lot — so much so that the forecast is for no more than unsettled weather in the United Kingdom. http://youtu.be/QVuB_tFdYVU Lastly, check out this animation of of satellite imagery from the National Weather Service. Make sure to watch it several times. Among other things, you can see the remnants of Tropical Storm Faye getting sucked up into the developing hurricane-force storm, while Gonzalo also begins to build further south.