Getting Droned On Greenland's Ice Sheet

https://www.youtube.com/watch?v=AEWCaA78WH8 If you're as fascinated by the science of our planet as I am, you've probably seen all sorts of imagery of the world's frozen places, including dramatic photos of summer meltwater coursing across the surface of the Greenland Ice Sheet. And now, for a new and thoroughly spectacular perspective, check out the video above. Shot from an unmanned aerial vehicle (UAV) — more commonly known these days as a drone — it shows ephemeral rivers of meltwater pouring into shafts, called moulins, in the ice sheet. It's part of a project, called the Dark Snow Project, managed by Jason Box of the Geologic Survey of Denmark and Greenland. Box and his colleagues are studying the impact of soot from wildfires and industry, and snow microbes as well, on the reflectivity of snow and ice in Greenland. If that sounds esoteric, consider that darkening of snow and ice can lead to increased melting. This happens because dark snow and ice are less reflective, which means they absorb more solar energy. And make no mistake about it: As the climate has warmed, large portions of Greenland have been experiencing accelerated melt: 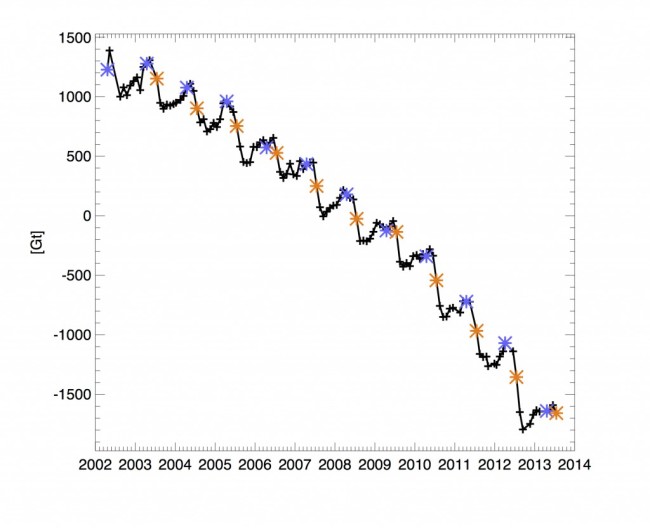 Monthly changes in the total mass of the Greenland Ice Sheet, measured in gigatons, estimated from measurements by the GRACE satellite since 2002. The blue and orange asterisks denote April and July values, respectively. (Source: NOAA Arctic Report Card for 2013) As ice melts and glaciers calve into the sea, the total mass of the Greenland Ice Sheet decreases. In the winter, mass is replaced in the form of snowfall. But as the graph above shows, over time, more mass is being lost than replaced — and the trend is accelerating. This is a serious issue, since melting in Greenland is contributing to sea level rise. How does the darkening of snow and ice from soot fit into this equation? That's what Jason Box and his colleagues are trying to figure out. And the use of drones is one of their innovative approaches. 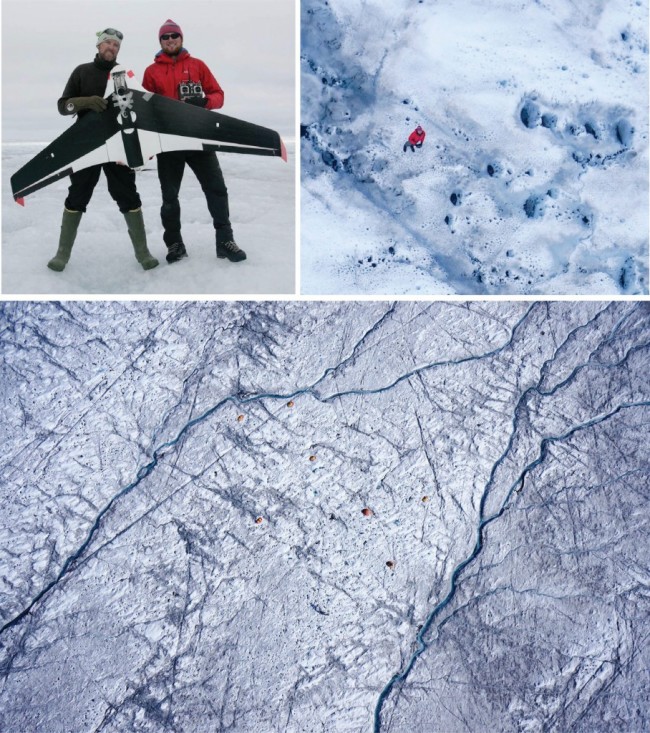 Top left: Jason Box and Johnny Ryan, a Ph.D. student at Aberystwyth University, on the Greenland Ice Sheet with the drone. Top right: photo from the drone of Ryan on August 9, 2014. The holes are darkened by dust, grit, and soot. Bottom: high altitude image showing the tents at the scientists' camp. (Source: Johnny Ryan; Jason Box. Via National Snow and Ice Data Center)

Box and graduate student Johnny Ryan of Aberystwyth University have camped this summer on the western part of the ice sheet near Kangerlugssuaq, Greenland. In addition to investigating the accumulation of soot, dust and microbes and the effect this has on reflectivity, or albedo, the researchers have gathered climate and melting data.

Box and Ryan are seen above holding their drone. I first spotted this collage of photos on the Greenland Ice Sheet Today web site of the National Snow and Ice Data Center. Here's how they describe what you're looking at:

UAV photos reveal a surface riven with fractures, and drained by ephemeral rivers of melt water. The mid-summer melt surface in this area is pocked with 0.5 to 1 meter-wide (1.5 to 3 feet-wide) potholes with black grit and dust collected at the bottom. This black material is called cryoconite, and is comprised of dust and soot deposited on the surface, and melted out from the older ice exposed by melting. The dark patches are often glued together by tiny microbes.

The scientists are comparing imagery and albedo measurements acquired by the drone to images from the MODIS instrument on NASA satellites. Their goal is relate the measurements of albedo taken from close to the surface to data for for the entire ice sheet.

Box says more drone videos, as well as information about their summer season on the ice, are forthcoming. So stay tuned.