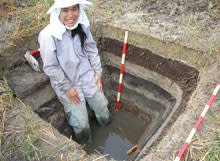 Two groups of geologists have found evidence that the Indian Ocean tsunami that devastated coastal towns in Southeast Asia in 2004 wasn't the first massive wave to pummel those shores, but the last tsunami of equivalent size occurred about 600 to 700 years ago.

That long gap might explain how enough geological stress built up to power the huge undersea earthquake that launched the killer waves four years ago, researchers said [AP].

One group of researchers took sediment samples on a barrier island off the west coast of Thailand, while the other group dug into the soil in a northern region of Sumatra.

The surge of a tsunami brings with it a great deal of sediment that rushes inland; the bigger the tsunami, the deeper and further inland the layer of sediment it leaves behind. In locations where those deposits aren't disturbed by wind or running water, they can be used as a historical record of tsunami after more layers are added later [BBC News].

In the twostudies, both published in Nature [subscription required], both groups found a buried layer of sandy tsunami deposits sandwiched between darker layers of peaty soil, and used carbon dating to determine that it had been laid down at least 600 years ago. The team working in Sumatra also found deeper layers of tsunami deposits; below the 600-year-old layer was another sandy deposit from about about 1,200 years ago, which researchers say suggests a "recurrence time" for large tsunami of around 600 years. Researchers say the findings may reassure residents of the Southeast Asian coast, as the results suggest that another huge tsunami isn't likely in the immediate future. But researchers also say this doesn't obviate the need for the tsunami early-warning system that is due to be officially launched in November, because

smaller local events occur every few years near seismically active regions from Indonesia to Oman. On 17 July 2006, for example, a magnitude-7.7 earthquake off Indonesia triggered three-metre high waves that killed hundreds of people along the south coast of Java [Nature News].