Last Friday, my friend and colleague Eli Kintisch of Science magazine had a piece in

about the latest in geoengineering research, a field that continues to burgeon. Now, scientists are talking about the possibility of conducting real geoengineering trials, on both the small and the medium scale--right up to the verge of climatic detectability. But as Kintisch reports, while some scientists think there could be a "safe" geoengineering trial, others argue there's really no such thing. Perturb the planet enough that you see a climatic effect, goes the thinking, and there are going to be a cascade of other consequences. The implication of this dispute, writes Kintisch, is disturbing:

...[the] back-and-forth over which experiments might be best and what sort of political treaties would be necessary raises a distressing possibility: It's not just that geoengineering tests will be difficult. It's that the problems they invite would be so diverse—and their results so inconclusive—that we're likely to skip the testing altogether. If countries are going to hack the stratosphere, they may just do it full-bore in the face of disaster.

Or, perhaps some rogue countries will do large scale geoengineering tests and defy the rest of the world. As the Russian scientist Yuri A. Izrael has rather ominously written

, "Already in the near future, the technological possibilities of a full scale use of [aerosol-based geoengineering] will be studied." 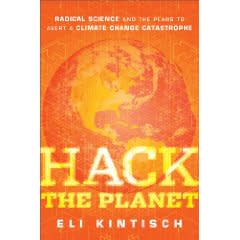 Speaking of study, I have a recommendation. Anyone interested in the geoengineering debate ought to click over to Amazon right now and pre-order Kintisch's forthcoming book, Hack the Planet: Science's Best Hope--or Worst Nightmare--for Averting Climate Catastrophe

. I've read an early version and give my full and enthusiastic endorsement. If our society is going to properly weigh the costs and benefits of geoengineering, we need a citizenry literate in and knowledgeable about the issue, and right now, there is no better way to achieve such literacy than to dig into this text....as someone who has followed the geoengineering debate for years now, I can guarantee it.