From Space, Spring Storminess Looks Like a Boiling Cauldron of Atmospheric Stew

And the stew is now boiling more vigorously: Heavy precipitation events have grown stronger and more frequent over the long run. 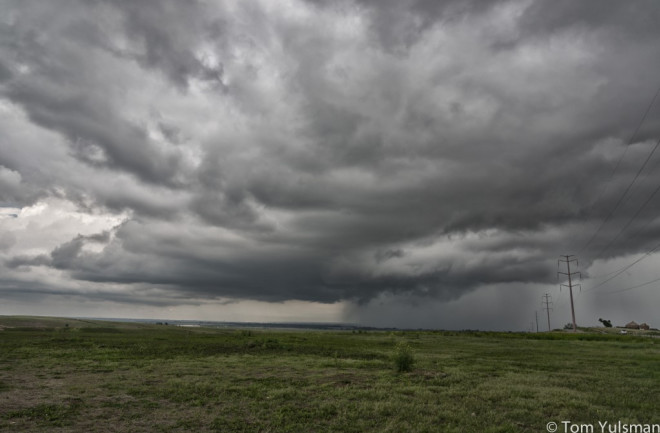 With big, boiling thunderstorms spewing hail and spawning tornadoes in the Southern Plains and beyond even as snow once again falls elsewhere, the weather sure does seem wild and weird this week. Spring often brings a meteorological roller coaster ride, thanks to the tension between lingering cold and spreading warmth. And, in fact, severe weather is the norm in the Southern Plains for this time of year.

Growth of a supercell thunderstorm over the Texas Panhandle, as seen in an animation of images from the GOES-16 weather satellite. (Source: RAMMB/CIRA)

You can see an example in the animation above, acquired over Lubbock in the Texas panhandle on May 5, 2019. It consists of high-resolution images acquired at one minute intervals by the GOES-16 weather satellite. In essence, this is a time-lapse video offering a stunning impression of the growth of the storm over a little more than four hours, ending in the evening. I find the overlay of false-color infrared visual data over the natural-color depiction of the land surface quite arresting.

But this "VIS/IR Sandwich" wasn't designed just to look pretty. The visual component provides meteorologists with high spatial detail. And the infrared part of the "sandwich" provides key data on the temperature of the clouds as they are boiling up to produce the supercell thunderstorm.

Keep reading below for more spectacular imagery of severe weather outbreaks over the Southern Plains. (And when you click on the animations, please keep in mind that they may take awhile to load up.) But first, a longer-term context to the storminess we're seeing this week — and for the past 12 months too, the wettest on record in the U.S. — as laid out in the most recent U.S. National Climate Assessment:

What of the cold and snow we're also seeing right now? Large southward plunges in the jet stream that allow cold air from the north to clash with building warmth in the south often linger into March. This helps stir up wild weather swings and extremes. But we're now well beyond March, yet we're still seeing large southerly jet stream dips — part of an unusual persistent pattern that's expected to linger for awhile.

Scientists have advanced a number of contested theories about how human-caused climate change is causing the jet stream to become wavier and get stuck that way for longer and longer periods. Key to these ideas is a warming Arctic that's diminishing the temperature difference between the higher and lower latitudes. That difference helps drive the jet stream. Weaken it, as is occurring now, and you weaken the jet stream. Or so a growing body of evidence suggests. But we should also keep in mind that it's still spring, when it is normal to get on the meteorological roller coaster ride.

Visible and infrared views of the May 5, 2019 thunderstorm over the Texas Panhandle. (Source: Cooperative Institute for Meteorological Satellite Studies)

Back to that roller coaster... The visualization above shows the evolution of the same supercell thunderstorm that's seen at the top of this post. This time, visible and infrared red views from GOES-16 are offered side by side. A feature known as an "overshooting top" is visible in both. Look for the dome-like protrusion shooting out above the anvil of the thunderstorm.

Diagram of a supercell thunderstorm, which shows the overshooting top rising above the anvil cloud.

An overshooting top occurs with strong updrafts within the storm and is indicative of a higher potential for severe weather. In the diagram above, the updraft currents are indicated by the red arrows. They trace a rising, cyclonic flow of air that explodes out of the top of the anvil.

The infrared imagery of the May 5 Texas storm indicates that temperatures at the top of the cloud were as cold as -80 degrees C — that's an astonishing -112 F! This occurred at an altitude of about 42,000 feet, according to a post by Scott Bachmeier at the CIMSS Satellite Blog featuring the side-by-side animations.

Supercell thunderstorm over Colorado and Kansas on May 1, 2019. (Source: RAMMB/CIRA)

This animation of GOES-16 images shows a supercell thunderstorm that boiled up over Colorado and moved into Eastern Kansas on May 1. Look closely as the storm is boiling up and you'll see that its core is actually rotating, just as in the diagram I included above.

Also striking: Lower level clouds are moving differently than ones above it. This is indicative of vertical wind shear — a change of winds with height. From the animation, it looks like low-level winds were blowing approximately from east to west.

Higher up, the wind flow was from the southwest to the northeast. This kind of shear can cause enhanced rotation in the air rising in the thunderstorm's core, inducing just the kind of cyclonic movement you can see in the animation. And that in turn can strengthen an already strong storm.

The GOES-16 weather satellite watched as a collection of thunderstorms grew over Texas and spread into neighboring states on May 2, 2019. An instrument on the satellite also mapped lightning discharges. (Credit: RAMMB/CIRA)

Of course, lightning is one of the most dramatic aspects of severe thunderstorms, and the GOES-16 satellite is equipped with a device that can map the explosive electrical discharges. The resulting visualizations can be quite spectacular, as the animation above demonstrates. It shows the birth and evolution of a mesoscale convective system over Texas on May 2.

An MCS is a collection of thunderstorms that act as a single system. This one seems to have lasted for more than 20 hours! Those blue flashes in the animation show where the Geostationary Lightning Mapper, or GLM, observed lightning flashes from cloud-to-ground, cloud-to-cloud, and inside individual clouds. Moving forward, the forecast is for more wild — and potentially deadly — weather over east Texas on Friday, expanding into the Mississippi Valley and up into the Southeast on Saturday.

The storminess is expected to bring widespread rain, thunderstorms, damaging winds, hail, isolated tornadoes and flash flooding. If you are in the path of this meteorological mayhem, please stay safe!