From space, numerous wildfires look like glittering embers strewn across a vast swath of the Pacific Northwest

As more than 140 new wildfires erupted in British Columbia and Washington State, a weather satellite captured this dramatic imagery 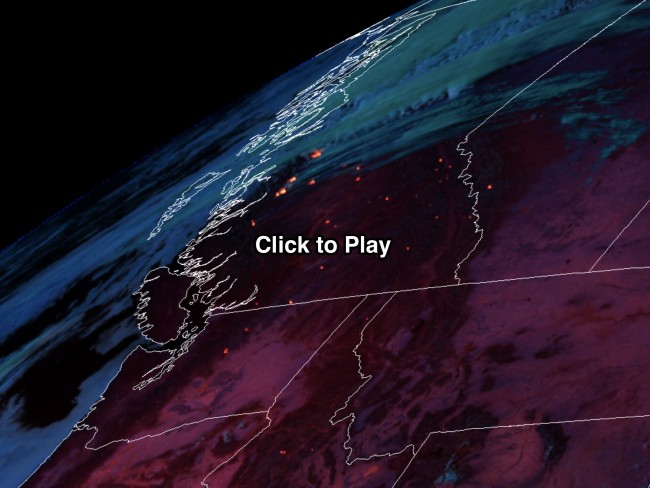 An animation of satellite imagery shows multiple wildfires burning across British Columbia and other parts of the Pacific Northwest. Areas of active burning look like glittering embers in a campfire. (Source: RAMMB/CIRA/GOES-16 Loop of the Day) Wildfires blazing in California have received a huge amount of attention in recent weeks. But this summer's wildfire crisis is much more widespread, as shown in dramatic fashion by the animation of satellite images above, as well as other images to follow. The animation consists of images acquired by the GOES-16 weather satellite over the course of 24 hours, starting at 10 a.m. local time on Aug. 9. It shows the intense heat signatures from dozens of fires blazing in British Columbia and other parts of the Pacific Northwest. To my eye, they really do look like burning embers in a campfire — except these blazes are, of course, very large and intense. As of yesterday (Sunday, Aug. 12), 586 active wildfires were burning in British Columbia, according to a post from the BC Wildfire Service's Facebook page. That number includes an astonishing 141 new wildfires that started that day across the Canadian province – mostly due to lightning activity. Since April 1, 1,784 fires have scorched 1,110 square miles of British Columbia — an area nearly twice the size of the city of Houston. That scorched acreage is already twice as much as the 10-year average for the entire fire season. Washington State also saw a dramatic upsurge in wildfire activity on Sunday, thanks to lightning strikes. More than 3,300 people are now battling the blazes in the state. In the animation above, the false color is characteristic of a remote sensing imagery product called "Fire Temperature RGB." It uses the near- and shortwave-infrared portions of the spectrum to reveal areas of active burning. Also visible are clouds, which appear in bluish and green tones. (For more details about this and other remote sensing imagery products used to monitor wildfires, see this post from the Seeing the Light Blog.) 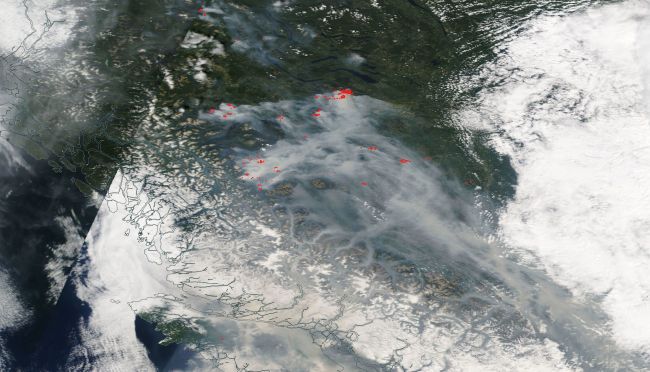 Satellite view of wildfires in British Columbia. (Source: NASA Worldview) The image above offers a closer view of the B.C. fires. Areas of active burning are indicated in red. Smoke is seen filling valleys in the rugged landscape of the Coast Mountains. A portion of Vancouver Island is visible toward the bottom of the image. It was acquired by NASA's Terra satellite on Sunday, Aug. 12, 2018. 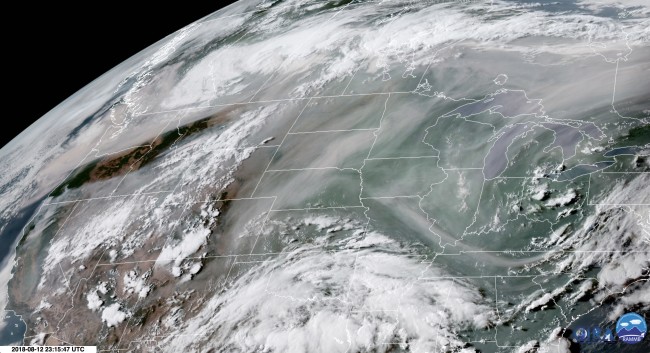 GOES-16 satellite image shows smoke across large portions of North America. (Source: RAMMB/CIRA/SLIDER) Smoke from the B.C. fires, along with blazes in Washington, Oregon, California and other parts of western United States, has blown thousands of miles to the east and south. You can see this clearly in the image above, acquired by the GOES-16 weather satellite on Sunday. In the image, clouds appear white, whereas smoke is darker, with a slight pinkish cast. 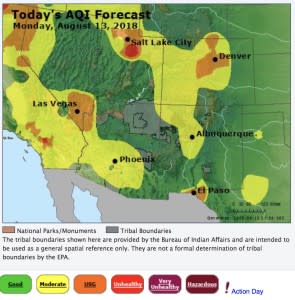 Air Quality Index forecast for part of the Western U.S. on Aug. 13, 2018. (Source: Air Now/EPA) To watch a loop showing how the smoke traveled over the course of 24 hours, starting yesterday, go here. Here along the plains on the eastern side of the Colorado Rocky Mountains where I live, the wildfire smoke has not spared us. It has been hazy for days. And the forecast is for today's air quality to be unhealthy for sensitive groups in a broad region around the Denver metropolitan area. (See the map at right.) Since I have asthma, that would include me. We're not suffering nearly as badly as folks living in close proximity to wildfires. Even so, I can't wait for rain to tamp down the fire activity.