Should we torch oil spills off Alaska with napalm?

By two o’clock on a late fall afternoon on Alaska’s North Slope, the sun is already setting and the well structures are casting long purple shadows, turning the snowy landscape into a postmodern version of Monet’s haystack paintings. In the midst of this scene stands Ian Buist, a chemical engineer who works with the U.S. Minerals Management Service, putting the finishing touches on a spill. Clad in several coats, coveralls, a yellow Tyvek suit, a flotation vest, and a hard hat with insulated flaps, Buist has made six oil spills today and hundreds more in 23 years of studying their physical chemistry. He measures out two gallons of crude and pours it evenly onto a six-foot pancake of broken ice floating in 16,000 gallons of seawater. 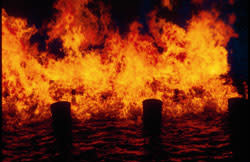 As an oil spill burns, the oil thins out and spreads across the water, extinguishing the flames. At a test tank in Ottawa, Canada, engineers experiment with a fire-resistant barrier that can contain the oil. A properly controlled burn can consume 90 percent of a spill.

“Every crude oil is different, and every well is different,” Buist says. He tosses in two sandwich bags that each contain precisely four ounces of napalm—a mixture of fatty acids and gasoline that forms a flammable jelly—and watches his spill go up in three-foot flames. For a minute or two, the fire takes the chill off the Arctic night, but then it dies, leaving a sludge that cools to resemble cheap chocolate.

No two oil spills of the six he’s igniting burn the same, and some burn weakly before sputtering out. Buist is trying to learn if fire can be used to clean up oil spills on slushy ice during the fall—conditions considered too dangerous for cleanup workers operating out of boats.

Chemical engineers tend to talk about oil’s complex chemistry the way gourmets talk about fine wine. In a spill, they say, everything is variable: the height of the waves, the temperature of the air, and the origin and the age of the oil. Even the ice makes a difference. Buist’s colleague, environmental engineer David Dickins, hoists a VCR-size chunk of sea ice above his head and points to the columns that stripe its surface. Between the columns lie chambers of brine that can draw spilled oil into the ice, he says. Once inside, a spill can travel with ice floes.

Over the past 15 years, Buist, Dickins, and other researchers working with the Minerals Management Service have developed sophisticated booms to contain spills, and skimmers and mechanical brushes to remove oil from water. They’ve tested dispersants to break up slicks, used cheerleader pom-poms to soak up oil, and developed software to predict the behavior of smoke from a burning spill. They’ve even developed a machine out of Dr. Seuss that removes oily ice chunks from water and scrubs them down. None of these methods can prevent oil spills, but they’ve helped make cleanups more efficient and predictable and helped prevent catastrophes in Alaska, off the coast of Oregon, and elsewhere. 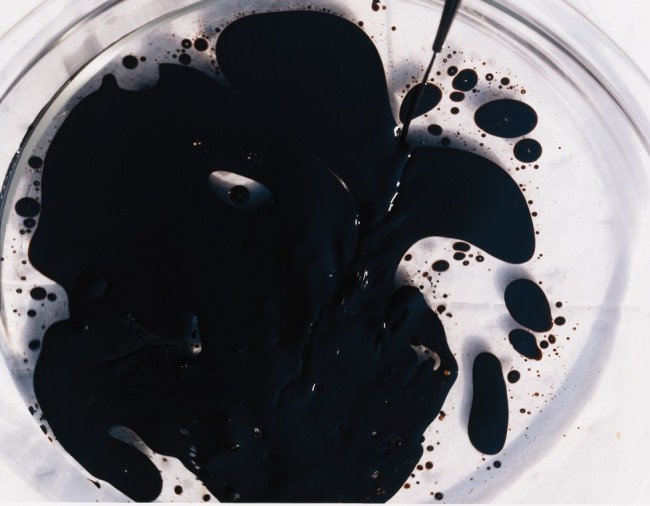 Oil and water form a miniature slick in the laboratory.

The potential for disaster in oil spills lies in the volatility of petroleum. Crude oil is an ever-varying stew of hydrocarbon bonds that release huge amounts of energy when they’re broken. Some of these hydrocarbons are very light, like methane gas—just a single carbon molecule attached to three hydrogen molecules. Isooctane, an additive in gasoline, has eight carbon atoms surrounded by 18 of hydrogen in a formation that looks a bit like the original starship Enterprise. It’s very flammable and so light that it evaporates quickly when spilled. Benzenes, formed of complex rings of carbon and hydrogen, are heavier and frequently toxic. Other compounds are heavier still—waxes, for example, and asphaltenes. 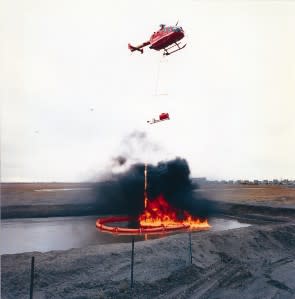 Chemical engineers use a helicopter equipped with a flamethrower—known as a helitorch—to set fire to a test spill of crude oil in Prudhoe Bay, Alaska, in 1994.

As soon as oil is spilled on water, its chemical composition begins to

change. Driven by surface tension, the slick spreads quickly, and fully half its volume can evaporate in 24 hours. “With oil spills, everything you see is not as it appears,” says Merv Fingas, chief of emergencies science and technology at the Environmental Technology Centre, a federal research facility in Canada. “A lot of people get fooled. Three-quarters of the changes in the oil will take place in the first day.”

What gets left behind is sticky and often toxic. Oil that has been sitting on water for a few days has concentrated mixtures of heavy molecules. Asphaltenes, the heaviest of the bunch, have molecular weights in the thousands. “They’re huge, gigantic molecules with sulfur, nickel, and vanadium sticking out in all directions,” Buist says.

Asphaltenes are partially to blame for the damage that an oil tanker called Prestige caused to hundreds of miles of coastline in northwestern Spain last November and the thousands of birds it killed. The tanker’s fuel oil was whipped into an emulsion by strong waves, much as mayonnaise is whipped by an electric mixer. “Asphaltenes like to have their legs in water and their bum in oil,” Buist says. “They line up at the oil-water interface and create a barrier that prevents the water droplets from banging together, coalescing, and settling out of the oil.”

Depending on the asphaltene content of the oil, the emulsion can be very stable—some have hung out on laboratory shelves for nine years, unchanged. The oil on the Prestige was a particularly heavy fuel oil, with an asphaltene content of 6.8 percent. As it emulsified, it quickly spread over 1,000 square miles of sea, floating to shore in sticky patties the size of sofa cushions. Worse, it multiplied in volume. When water mixes with oil, the amount of the goo can double or triple. In addition, the viscosity of the oil changes when it emulsifies. In the early days of the Prestige spill, the oil was as viscous as molasses, but later it was more like chewing gum. Shore cleanup crews had to resort to using buckets and shovels because the goop clogged the pipes and hoses that are normally used to vacuum up a spill.

For the people who clean up oil spills, the lessons are clear: The sooner you clean it up, the better. "There's a narrow window of opportunity," says John Parson, a supervisor on the North Slope Spill Response Team. Parson oversees a fleet of 92 boats, 211 skimmers, eight helitorches (flamethrowers mounted on helicopters), a gaggle of snowmobiles and airboats, and a bank of mobile command centers kept heated and ready. There are about 1,000 spills across the North Slope every year, ranging in size from a few buckets up to 250,000 gallons. Vacuums, skimmers, and absorbents can clean up only 10 to 20 percent of a large spill, so Parson has to resort to alternatives. In other areas, for instance, chemical dispersants are used to quickly break up an oil slick on water. Sprayed from planes or boats, dispersants reduce the surface tension at the oil-water interface, allowing waves to break the slick into tiny droplets. Dispersants can keep a spill from harming coastlines or wildlife, and they speed up biodegradation. Nevertheless, the oil stays in the water. Dagmar Schmidt Etkin, an analyst with Environmental Research Consulting in Cortlandt Manor, New York, compares the use of dispersants to chemotherapy. "People wish the cancer had never happened, and the chemo causes new problems. But you have to look at the net benefit."

In situ burning, the technique Buist is studying, is catching on as a way to quickly remove oil from water. Under the right conditions, a burn can remove more than 90 percent of the oil in a spill. The flaming napalm produces enough heat to vaporize some of the oil, which then burns and keeps the reaction going. In the final stages of a burn, the water underneath boils, tossing drops of oil directly into the flames. These droplets explode, shooting off sparks and crackling like tiny firecrackers. When the slick gets too thin to insulate the vaporizing oil from the cold water underneath, the flames go out. 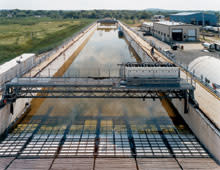 Longer than two football fields and filled with 2.6 million gallons of salt water, this test tank in Leonardo, New Jersey, allows scientists to re-create nearly all the conditions of a spill. The tank includes oil distribution and recovery systems, an artificial beach, and a machine that can create waves up to three feet high.

Critics of burning say the technique just moves pollution from the water to the air. But the smoke is not much different from that of a wood-burning stove—a mixture of carbon dioxide and water, with about 10 percent particulate matter. Depending on the type of oil and the wind conditions, burns must be conducted up to six miles from populated areas; within an hour, the particles disperse. A 1999 spill off the coast of Oregon all but disappeared when the governor gave orders to burn it. An oil slick, by contrast, can take months or even years to be removed from a shoreline.

Containing the oil from the Prestige required a different sort of technology. A tiny three-person French submarine named Nautile descended more than 12,000 feet to the wreck, where it used robotic arms to close valves and seal cracks with steel plates and steel bells, which were then ballasted with sandbags. After 40 dives, the amount of oil escaping the ship fell from 125 tons to less than two tons a day. The spill has been reduced to a thin sheen above the wreck.

Back in Alaska, long after it gets dark and the temperature drops below zero, Buist continues to make spills and set them on fire, looking for patterns among the oils and the ice. The oil, which has weathered for two weeks, burns sluggishly among the ice chunks, its flames drowning in the waves. It dies out, then flares up wildly. Buist shakes his head. Then he heads off to weigh the oil left in the water, a measure of the burn's efficiency. "We're trying to peek into the situation and get an idea of what might happen," he says. "When we're done, we hope to establish some rules of thumb."