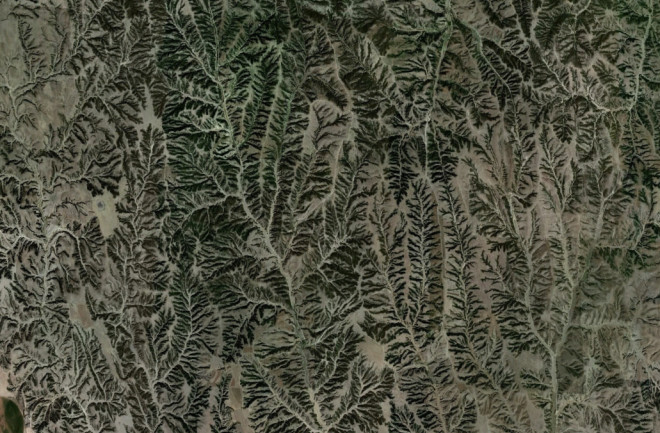 Drainages make a fractal pattern in this satellite image accessed with Google Earth from somewhere in the United States. (Image: © 2011 Google) Something to ponder over coffee on a lazy Sunday: Where is this fractal drainage pattern located? Leave your answers in the comments below, and we'll see how long it takes for someone to get it right. The image a screenshot of a satellite image, and it's also part of a feature here at ImaGeo that will appear regularly: EarthArt. Google Earth is an amazing tool for exploring the world and finding images like this. What are fractals? From the Fractal Foundation (who knew that such an organization even existed?):

A fractal is a never-ending pattern. Fractals are infinitely complex patterns that are self-similar across different scales.

Here's an image of the same region captured from considerably lower — while I was flying on a commercial flight recently:

The same fractal drainage pattern, seen from an airplane. I shot it using my iPhone and processed it with the Snapseed app. (Image: copyright Tom Yulsman) May the best Discover reader win...