Fracking Poses a Risk to Our Water Supply 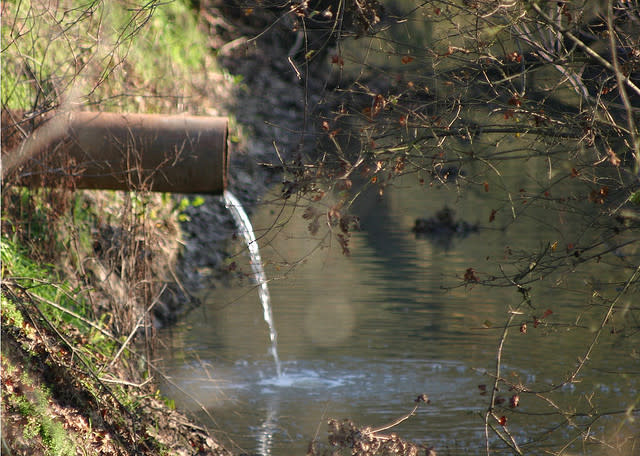 The recent boom in fracking has turned America into the Saudi Arabia of natural gas, almost overnight. Proponents say that this burgeoning industry has ensured U.S. energy independence for years to come, and created a more climate-friendly alternative to dirtier-burning fuels like coal and gas. It has arguably also hastened the demise of the coal industry, as power plants switch in large numbers to the cheaper gas, resulting in U.S. CO2 emissions sinking to their lowest levels in nearly two decades. And with less smog-producing particulates and deadly mercury in the air, we can hope that respiratory illnesses like asthma may begin to decline. But fracking poses its own risks. While our air has been getting cleaner, opponents argue that America’s water has been getting dirtier as the result of the hydraulic fracturing of shale. Fracking uses lots of water---up to seven million gallons for every well drilled---which is mixed together with sand and a witch's brew of industrial chemicals, then blasted a mile into the earth to the shale formations where the natural gas is located. This high pressure stream shatters the rock and releases the gas, which geysers up to the surface to be recovered. But what exactly happens to the water which is shot into the earth? A study published today in the journal Science says that we don’t entirely know the answer to this yet---and what we don’t know may harm us. The missing half What we do know is that about half of the fracking fluid gushes back up to the surface. “People focus on what exactly are the chemicals that we are putting into frack fluid,” said Radisav Vidic, the lead author of the study and a professor at the University of Pittsburg, in a Science podcast. “But a more significant problem is what comes out---because the quality of what comes out is many, many times worse than the quality of the water that was injected into the well.” That’s because the frack water picks up contaminants underground---a variety of salts, benzene, heavy metals, organic compounds and radioactive substances such as radium-226, which is found in high levels in the Marcellus Shale formation that is being fracked from West Virginia to Pennsylvania. 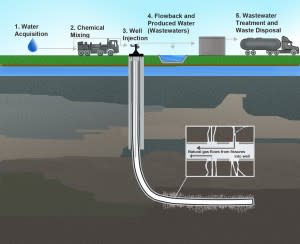 The hydraulic fracturing water cycle. Courtesy EPA Vidic says that disposing of this briny and highly contaminated water can be a problem. Either it is re-injected deep into wells in the earth where, theoretically, it remains for perpetuity; or it is purified in a waste treatment facility and then either recycled or discharged into a river. If all of this goes smoothly, our water supply remains pristine. But the study warns that accidents can, and do, happen. In one well-publicized incident, improperly treated fracking fluids were discharged into the Monongahela River, which provides drinking water for most of Pittsburgh, forcing 325,000 residents of the region to switch to bottled water for several weeks. Another potential problem area is the roughly half of the water used in fracking which does not migrate back to the surface through the drilling shaft, but remains interred underground. Ideally, Vidic says, this contaminated water will never come in contact with the groundwater, which sits in the aquifer thousands of feet above it. But he adds that there is a lot that we still don’t know about how water moves underground. A leaky system Gas companies argue that the frack fluid is prevented from fouling the groundwater by the thick cap of bedrock which sits between it and the aquifer. However, the Pennsylvania researchers point out that geological formations are not watertight. There can be networks of fractures in the rock which permit toxic fracking fluids to flow back up towards the surface under certain circumstances. 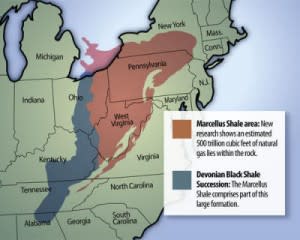 Marcellus Shale underlies a U.S. East Coast region from New York to Virginia. Courtesy USGS This flow underground might account for some of the reports of tainted water in wells near gas drilling sites. But there are also other ways that fracking fluids can get into our water; for example, through cracks in well casings, well blowouts, and surface spills from trucks or containment ponds. Anthony Ingraffea at Cornell University found that there was an 8.9 percent failure rate among wells in the Pennsylvania Marcellus region in 2012, and he predicts that leaks and other problems will become increasingly common as the wells age. What kind of impacts might these leaks have? There have been numerous anecdotal reports of illnesses in people living near fracking wells, but not yet any long-term epidemiological studies. One stumbling block is that the chemical mix added to the fracking fluid is a mystery. Many of the scores of industrial chemicals being used are not currently regulated by the U.S. Safe Drinking Water Act, says the Science study, due to a loophole introduced by former Vice President Dick Cheney which exempts natural gas drilling from certain provisions of the environmental law. Drillers have so far refused to reveal their formulas, claiming this is proprietary information. But Vidic and his colleagues say that companies need to disclose the exact composition of the injection fluid---information which is critical for scientists and regulators in their efforts to ensure water quality. The researchers also point out that states including Pennsylvania are not yet consistently collecting the kinds of hard data about surface water and well water quality which would allow us to assess the impact that fracking is having. Until this monitoring takes place, they argue, fracking's effect on our water supply is anybody's guess.

Richard Schiffman is an environmental journalist, poet and author of two books based in New York City. You can read more of his work here.