Forests Are Dying in the American West: Global Warming Is Likely to Blame 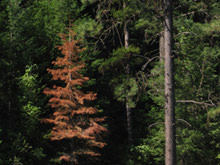 Trees in the old-growth forests of the American West are dying at an accelerating pace, and researchers say that the early impacts of global warming are probably to blame. The bad news was found in California, the Pacific Northwest, and in the interior Western states. Says study coauthor Phillip van Mantgem:

"Tree death rates have more than doubled over the last few decades in old-growth forests across the Western United States." ... The researchers found rising death rates across a wide variety of forest types, at different elevations, in trees of all sizes and among major species, including pine, fir and hemlock [Los Angeles Times].

Van Mantgem says that average temperatures in the West have risen by more than 1 degree Fahrenheit in the last few decades.

"While this may not sound like much, it has been enough to reduce winter snowpack, cause earlier snowmelt, and lengthen the summer drought" [Reuters]

, he says. Droughts make trees more stressed and vulnerable to disease, and warmer temperatures have also allowed the spread of pine beetles and other pests that attack trees. And while the death rate of old trees is increasing, the rate of new trees sprouting and surviving has not risen. Researchers looked for other plausible causes for the increase in tree dieoffs, but reported in Science [subscription required] that rising temperatures are by far the likeliest cause.

One possibility was that decades of fire suppression had made forests denser than they used to be, so that increased competition for resources raised the death rate. But the team found no evidence to support the theory. Another potential culprit, air pollution, was also ruled out. For example, death rates in Washington's relatively pristine Olympic National Park were no better than those in the heavily ozone-polluted southern Sierra Nevada [National Geographic News].

If the current trend continues, researchers say that Western forests will be sparser and have fewer old trees.

This would be a setback in the fight against global warming because thinner forests with small, young trees store less carbon, so more heat-trapping carbon dioxide would cycle into the atmosphere [Wired News].

A decrease in old-growth forests would also limit the range of birds and other animals that make their homes in such forests. Finally, a forest full of dead wood would increase the risk of catastrophic wildfires. Related Content: 80beats: Want to Capture Carbon? Protect Old Trees 80beats: Plants “Climb” Mountains to Escape Global Warming DISCOVER: Want to Save the Trees? Try Paying People Not to Chop Them Down. DISCOVER: If All the Trees Fall in the ForestImage: Andrew J. Larson