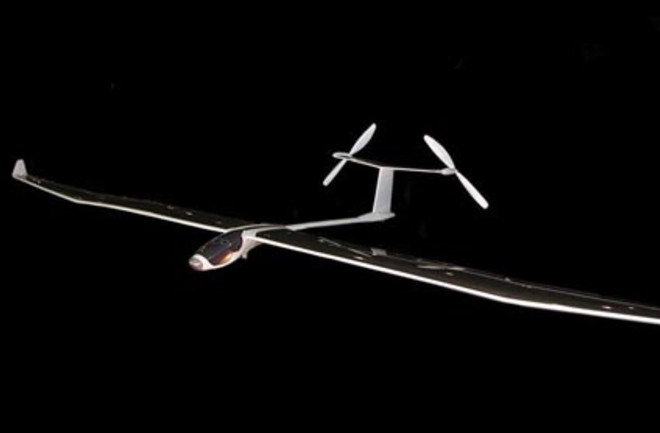 This time, Solar Impulse has really taken to the skies. When we last left Swiss adventurer and around-the-world ballooning enthusiast Bertrand Piccard, he and his team were celebrating their first test flight of their solar-powered plane in December. However, those tests were really just "flea hop" tests to get the plane a couple feet off the ground. This time, though, Solar Impulse has completed a two-hour true test flight, a big step toward Piccard's goal of flying the solar plane around the world.

At a military airport in the Swiss countryside, the "Solar Impulse" plane lifted off after only a short acceleration on the runway, reaching a speed no faster than 45 kph (28 mph). It slowly gained altitude above the green and beige fields, and disappeared eventually into the horizon as villagers watched from the nearest hills [AP]

. Piccard says the test proved his plane—which weighs about as much as a car and runs on 12,000 solar cells with lithium batteries and electric engines as emergency backup—can not only fly, but fly straight. Since the plane will be flying without a drop of liquid fuel, he says, it must stay on its planned trajectory and conserve energy.

A night flight is planned later this year, and then a new plane will be built based on the results of those tests. The big take-off is planned for 2012 [BBC News]

. Piccard and his piloting partner, Andre Borschberg, will trade off piloting the solar plane on what will be an extended journey. Their average flight speed should be around 45 miles per hour, meaning long hours stuffed in the tiny cockpit. Thus, their round-the-world flight includes several stops in which to show off their creation, and stretch their legs. Previous missions have attempted large-scale solar flight, but leave it to Piccard to push the envelope. He

comes from a long line of adventurers. His late father Jacques plunged deeper beneath the ocean than any other man, and grandfather Auguste was the first man to take a balloon into the stratosphere [AP]