Flushed Pharmaceuticals Are Likely Drugging Stream Dwellers Like The Platypus

Bugs are consuming pharmaceutical drugs pumped into streams, which then end up in the systems of predators, like the platypus. 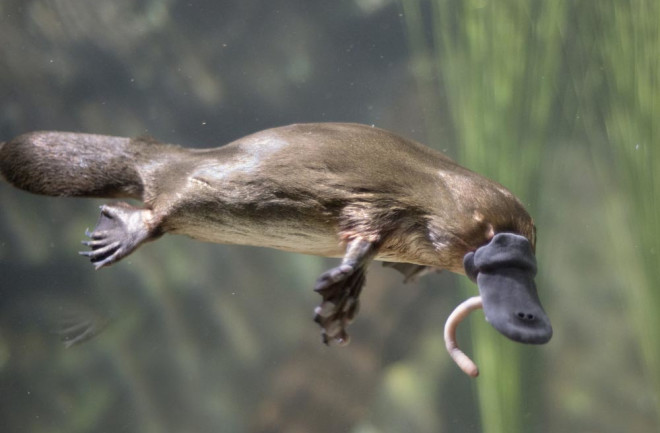 Humans don’t absorb 100 percent of the drugs we consume. The pharmaceuticals that our bodies don’t use are cleared from our systems and flushed down into sewage systems, processed in water treatment plants, and finally dumped into streams and other waterways.

But an alarming number of pharmaceutical compounds aren’t filtered out during the treatment process. Research published today in Nature Communications shows that this might have an even bigger effect on stream ecosystems than anyone expected. A range of drugs used by humans were detected in Australian stream invertebrates and the spiders that eat them. The researchers have reason to worry that this will have compounding effects up the food chain – to stream predators like trout, or Australian favorite the platypus.

Freshwater aquatic invertebrates are foundational members of stream ecosystems worldwide. They are the tiny critters living under rocks and fallen logs, eating things like algae, leaf litter, and each other to keep the system spinning. They’re things like snails, worms, mussels, crayfish, and larvae of insects like dragonflies.

In the new research, the team, led by Erinn Richmond, then at Monash University, was interested in how much these aquatic invertebrates were absorbing chemical compounds, specifically from pharmaceuticals, that pollute rivers.

Richmond collected invertebrates from six streams in Melbourne, Australia that spanned a gradient of wastewater exposure, from highly contaminated to relatively pristine.

The team then tested the invertebrates – after sacrificing them for science, R.I.P. – for chemical compounds using a technique called Liquid Chromatography Mass Spectrometry (LC-MS). This process separates distinct chemical compounds (the LC step) and then measures each one’s ratio of mass to their ionic charge (the MS step). The latter gives a unique signature that can be used to identify different compounds.

They detected 69 different drug compounds across all the invertebrates they sampled. Every single invertebrate they tested had detectable amounts of at least one pharmaceutical – even the ones from the most pristine river they looked at.

“We were just amazed at the sheer diversity of compounds,” says Richmond. “We expected to see higher concentrations downstream of direct inputs from wastewater treatment plants, but we were very surprised to see just how many we were finding.”

Many of these aquatic invertebrates are the larvae of insects that leave the water as adults. This means they live out the rest of their lives on land where they might be eaten by terrestrial predators like spiders.

So to see if the aquatic pharmaceutical contamination would make it onto land, the scientists also tested the spiders living on the river’s edge that are known to specialize in eating the adult versions of the river-based larvae.

They found traces of 66 of the compounds in the spiders. At some sites, the pharmaceutical concentrations were an order of magnitude higher than in the nearby aquatic invertebrates.

This would suggest some of these compounds are bioaccumulating, or becoming more and more concentrated as they move up the food chain. A single spider eats a lot of insects, so any time a compound has accumulated in the bodies of the insects, the spider that eats them will be exposed to substantially higher levels.

But the researchers’ results on this front were inconclusive: in their most contaminated site, pharmaceutical concentrations were lower in the spiders than in the stream invertebrates, not higher. This could simply be a sign that those spiders were eating fewer stream invertebrates than their cousins living near less polluted streams, but it’s too hard to say without a more direct test.

Regardless of the size of this contamination multiplier, it’s still clear that many of the pharmaceuticals in the streams made it up onto land.

The researchers lastly considered how these pharmaceuticals might affect two predators in their Australian stream ecosystems: the non-native brown trout and the native Australian platypus. Both exclusively feed on invertebrates in the stream, so the team wanted to estimate just how much of these drugs they might be exposed to.

They crunched the numbers based on the concentrations they measured in the invertebrates and the predators’ normal eating habits. They found that the two predators are likely taking in drugs on a daily basis from at least 22 different drug classes at a rate of about 2 to 10 percent of what a human dose would be.

The notable exception was antidepressants: The scientists estimated the trout would consume almost 30 percent of a human antidepressant dose daily, while the platypus would take in closer to 50 percent. Richmond thinks this could be because of some combination of high use of the drugs and their persistence in waterways, which allows them to maintain consistently higher concentrations in the water — and in the animals.

More research is needed to confirm the extent of this problem globally and how these pharmaceutical concentrations affect the animals throughout these food webs.