The global footprint of fishing is even bigger than expected. But a novel monitoring tool could help put it on a more sustainable path. 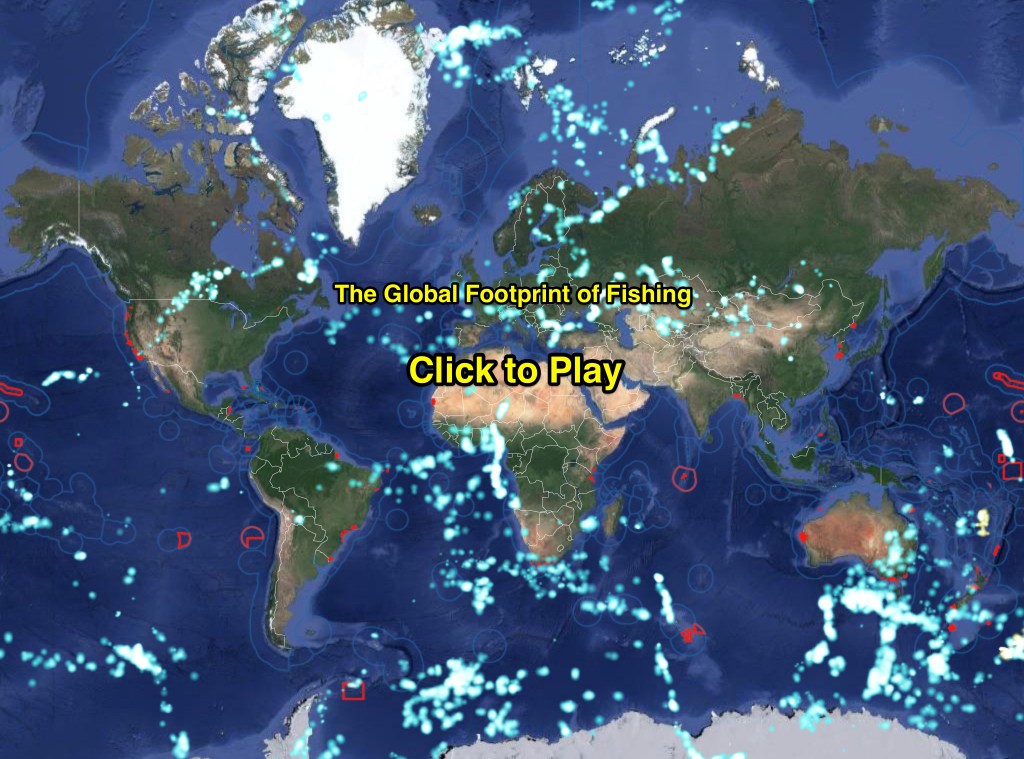 An interactive website powered by a dataset and algorithm detailed in a new study allows the global footprint of fishing to be tracked in real-time — down to the level of individual vessels. See below for details on how to use the website. (Source: Global Fishing Watch) To satisfy our hunger, we humans catch something on the order of one trillion fish ever year — a yield that amounts to more than 90 million tons of animal flesh. We're clearly the top predator of the seas. But just how much of the oceans are being fished at an industrial scale, what are the patterns, and how are they changing over time? Answering those questions could help us make fishing more sustainable. And now, scientists have come up with some answers. Using common ship-tracking technology, and self-learning computer programs to process huge volumes of data, a team of researchers has produced the first ever picture of the global footprint of fishing. That footprint is, in a word, gargantuan. Fishing activity now spreads across more than 55 percent of the world’s oceans, according to the new study, published in the journal Science. That's an area four times greater than all the farmed land on Earth. 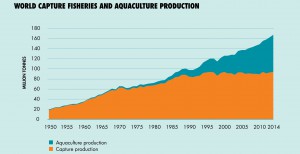 Source: The State of World Fisheries and Aquaculture, Food and Agriculture Organization of the United Nations. According to the research, 70,000 fishing vessels traveled nearly 286 million miles in 2016. This is equivalent to traveling to the Moon and back 600 times. “I think most people will be surprised that until now we didn’t really know where people were fishing in vast swaths of the ocean,” says co-author Christopher Costello, a professor at the University of California Santa Barbara. But the researchers didn't just produce a static picture of fishing's imprint. They've created a dynamic, interactive dataset, called "Global Fishing Watch," that makes it possible to monitor the footprint in real time, right down to the level of individual ships. “This new, real-time dataset will be instrumental in designing improved management of the world’s oceans that is good for the fish, ecosystems and fishermen,” Costello says. You can check on fishing's imprint by clicking on the image at the top of this story. That will take you to the Global Fishing Watch interactive website, where you can watch an animation of fishing activity, month-by-month, during 2017. (On the web page, click on the 'play' button at lower left.) The blue white and yellow circles show areas where fishing vessels were active. In the upper right corner is a counter showing total fishing hours, month-by-month, for all vessels during the selected time period. You can also stop the animation at any time and zoom in all the way to the level of an individual vessel. Click on it to get details about the vessel, as well as a track of its course during the selected time period. Also make sure to move the slider forward in time to see what the global fishing footprint looks like right now. 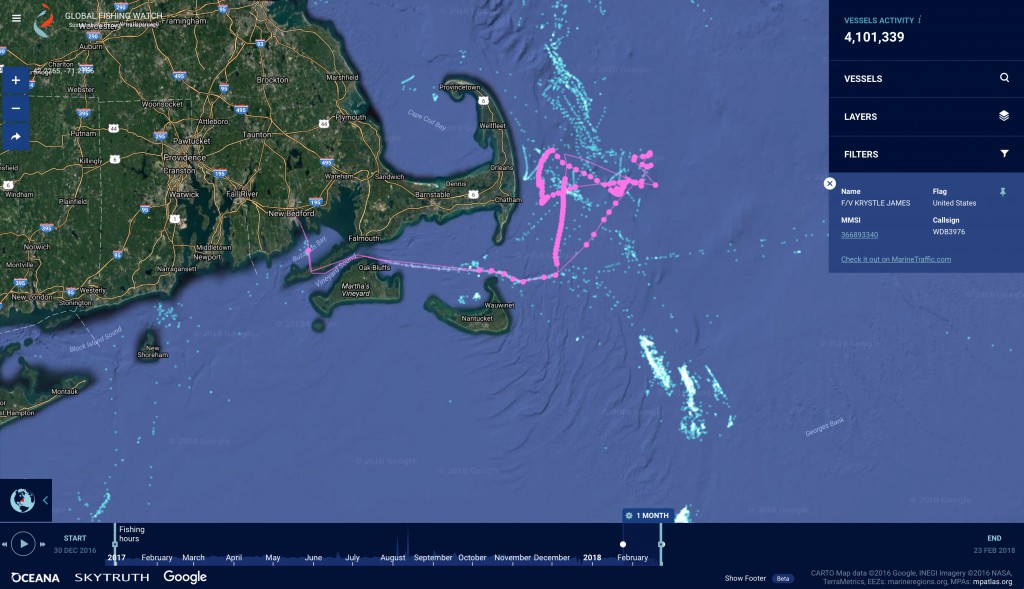 The pink track shows the travels of the F/V Krystle James, an 88-foot fishing vessel, during a one-month period, ending on Feb. 23, 2017. Click on the image to access the interactive Global Fishing Watch website. From here you can play an animation of all fishing activity in the area, month-by-month, over the course of a year. (Source: Global Fishing Watch) The new tool could help with management of one of the most important sources of protein in our diets. In fact, fish are now a more important protein source than beef. And without fish, it's difficult to imagine how we'll be able to feed the more than 9 billion people who will be sharing the planet by 2050. We really need fish for other reasons as well. Catch too many and we can do serious harm to marine ecosystems — which are essential to our survival as a species. Consider that 70 percent of the oxygen we breathe is produced by phytoplankton in the oceans. Unfortunately, about a third of the world's fisheries are being overfished. This means more fish are being taken than can be sustained over the long run. Continuing down this path will ultimately lead to depletion of the fish stocks — and even an abrupt crash, from which recovery is exceedingly difficult, if not impossible. In order to put fishing of the oceans on a more sustainable track, we need better information about who is fishing where and for how long, as well as the climatic and socio-political influences on the patterns of industrial-scale fishing. That's precisely how the the Global Fishing Watch dataset and algorithm can help. 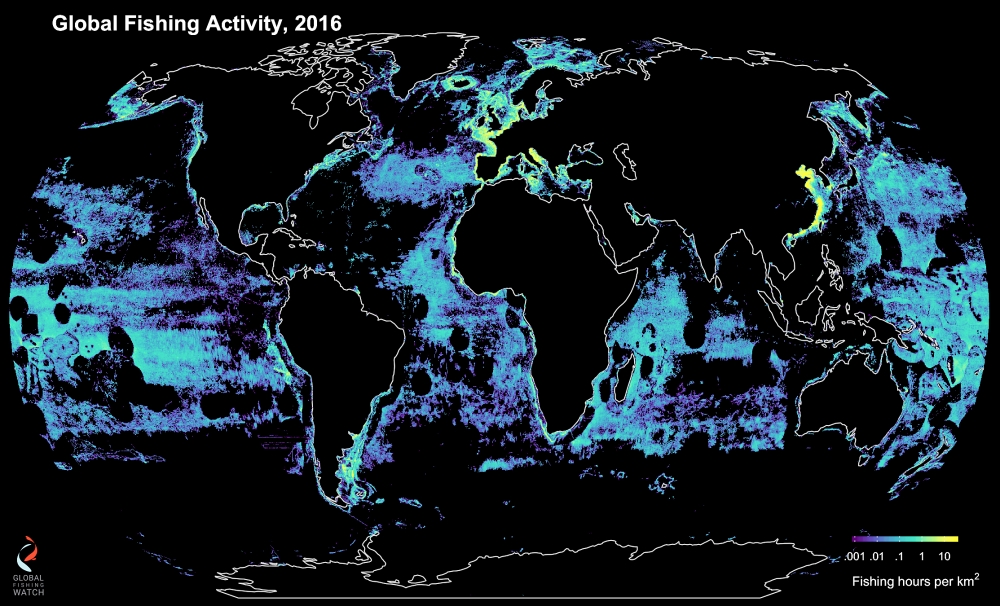 Fishing activity globally as measured by fishing hours per square kilometer. (Source: Global Fishing Watch) To construct it, Costello and his partners relied on the Automated Identification System carried by boats larger than a certain size. A vessel's AIS beams location and identifying information to orbiting satellites every few seconds, much as airliner transponders provide data on location, altitude, speed and other parameters. The research team used machine learning technology to analyze 22 billion AIS messages from vessels between 2012 to 2016. This work identified more than 70,000 commercial fishing vessels that engaged in greater than 40 million hours of fishing activity. And that's not all. The analysis also revealed the size and engine power of the ships, what they were fishing for, and, crucially, when and where they fished — right down to the hour and mile. The researchers also made sure to cross-check their analyses against actual ship log books. “This dataset provides such high-level resolution on fishing activity that we can even see cultural patterns, such as when fishermen in different regions take time off,” said co-author Juan Mayorga, a sustainable fisheries expert at the University of California Santa Barbara, quoted in a press release. Among the research findings: Most nations fish within their exclusive economic zones. But some have vigorously pursued fishing far afield. Of these, China, Spain, Taiwan, Japan and South Korea accounted for 85 percent of the observed fishing on the high seas during 2016.