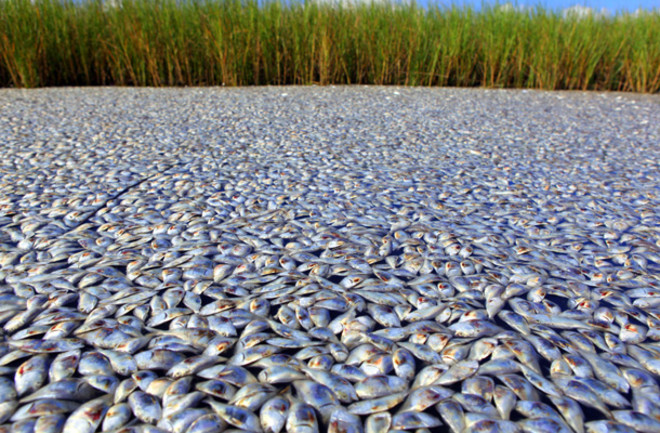 This photo shows a portion of a massive fish kill in the Bayou Chaland area of Plaquemines Parish, Louisiana, taken on September 10, 2010. Plaquemines is Louisiana's southernmost parish, where the Mississippi River meets the Gulf of Mexico. Counted among the dead fish were pogie, redfish, shrimp, crabs, and freshwater eels. A statement issued by the Louisiana Department of Wildlife and Fisheries released the day after the fish kill stated the fish died from low oxygen levels and was not caused by the Deepwater Horizon oil spill.

P.J. Hahn, the Director of the Coastal Zone Management Department, points out the the LDWF came to that conclusion without taking any water or fish samples of the area. P.J. Hahn: "We had three fish kills in eight days, all in areas that were heavily oiled during the Deep Horizon Oil spill. The first was in Chaland Pass, the second near Bay Joe Wise and the third was in Bay Robinson. All kills covered areas approximately two square miles in size. I collected water and fish samples and turned them over to our DA’s office. Early independent testing results show the fish have oil in their gills and liver. Now a more detailed testing will indicate the fingerprint of the oil to see if it matches the BP Deep Horizons oil."