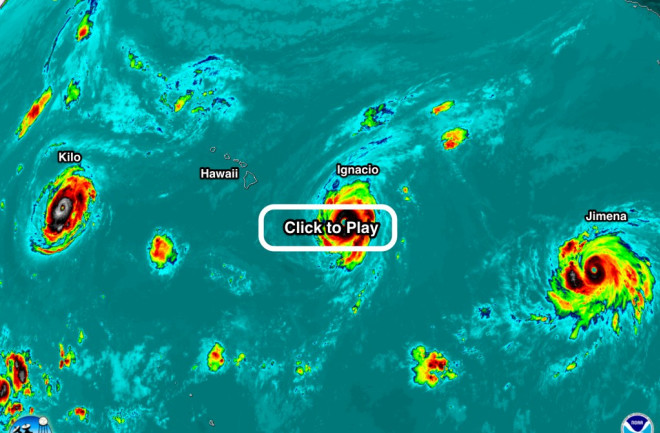 Three hurricanes are seen in this screenshot of an animation of images from the GOES-15 weather satellite. From left to right: Hurricane Kilo, Hurricane Ignacio and Hurricane Jimena. (Source: Scott Bachmeier, CIMSS) The unusually warm waters of the Pacific Ocean have helped spawn three hurricanes in the Pacific Ocean. And according to Scott Bachmeier of the Cooperative Institute for Meteorological Satellite Studies, this is something we haven't seen before: three hurricanes rated at category-4 swirling east of the dateline at one time. You can see them lined up in the screenshot above, from an animation of satellite images. Click it and be mesmerized by this synoptic view of hurricanes Kilo, Ignacio and Jimena all kicking it up together in a kind of cyclonic chorus line. Click here for the latest reports on the three hurricanes from the Joint Typhoon Warning Center. Here's another view of the three hurricanes, acquired by NASA's Terra satellite on Saturday, Aug. 29:

NASA's Terra Satellite captured this image of three hurricanes in the Pacific Ocean on Aug. 29, 2015. From left to right: hurricanes Kilo, Ignacio and Jimena. (Source: NASA Worldview) If you look carefully at this image, you should spot the Big Island of Hawaii to the northwest of Hurricane Ignacio. The latest forecast track has the cyclone just skimming by the Hawaiian Islands without making landfall. Let's hope that forecast holds up. Meanwhile, Jimena is following in Ignacio's wake. The forecast track has this cyclone beginning to curve on Tuesday and Wednesday on a path that should steer it clear of Hawaii. But it is too soon to say for sure. In the meantime, check this storm out:

Hurricane Jimena and the Moon, as seen from the International Space Station. (Source: Scott Kelly/NASA) Astronaut Scott Kelley shot this photograph of Hurricane Jimena and the Moon from the International Space Station. "Jimena in the Pacific is a massive storm. Makes the Moon look puny," he Tweeted earlier today.