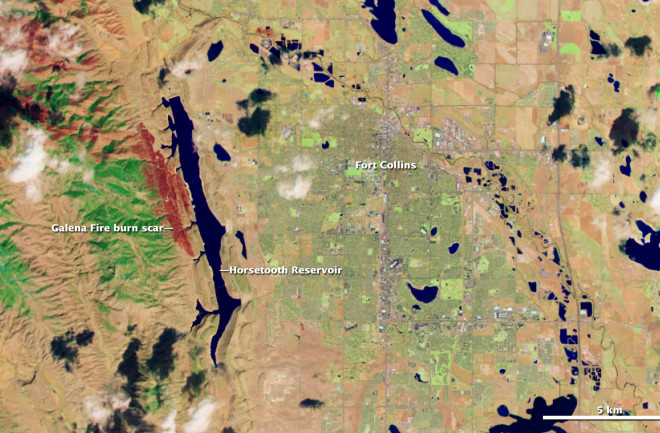 This image from the Thermal Infrared Sensor (TIRS) on NASA's LDCM satellite shows the area burned by the Galena Fire just west of Fort Collins, Colorado. The sensor detects thermal infrared wavelengths of light coming from the surface. (Image: USGS/NASA Earth Observatory) The first images captured by a critical new satellite have been released by NASA — and they zero in on the area just burned by the Galena Fire here in Colorado. You can see the burn scar in the image above. It happened just west of Horsetooth Reservoir, source of drinking water for the city of Fort Collins, which sprawls out across the plains at the foot of the Rocky Mountains. The fire is particularly noteworthy because of it's timing. Fire season here doesn't usually start until May, but the Galena Fire began last Friday, March 15. Encouraged by dry conditions, as well as very high temperatures and high winds that day, it quickly grew to nearly 1,000 acres. Full containment was achieved yesterday, at 1,348 acres. The Galena Fire was not a terribly large fire, especially when compared to the nearby High Park fire, which torched 87,284 acres last June and was the second-largest and second-most destructive wildfire in Colorado history. But it is significant because it may be another sign of lengthening fire seasons here in the West. For more information about the drought conditions, low snowpack, and broader climatic context that contributed to this very early fire, see "Ready... Set... Burn..." from last week. The satellite that captured the image above is the Landsat Data Continuity Mission. LDCM is NASA’s eighth satellite in the Landsat series. It joins two aging spacecraft, Landsat 5 and Landsat 7. Here's another view of the burn captured by the LDCM satellite:

The Galena Fire burn scar is visible in this natural color image from the Operational Land Imager aboard the LDCM satellite. (Image: USGS/NASA Earth Observatory)

This one is obviously in natural color. It is from the Operational Land Imager, or OLI, which is sensitive to the wavelengths of light that our own eyes see. If you look just to the left of the burn scar, which is to the west, you'll see some dark green indicative of conifers growing in the foothills.

The forested foothills of what's known as Colorado's Front Range are at high risk for wildfire. They also happen to be popular places to live.

These and other fire-prone areas in Colorado are known as "red zones." An investigation last year by the I-News Network, an independent investigative news service, found that a quarter million people have moved into Colorado's red zones in the past 10 years. One in four of the state's homes is now located in one of these high-risk fire zones.