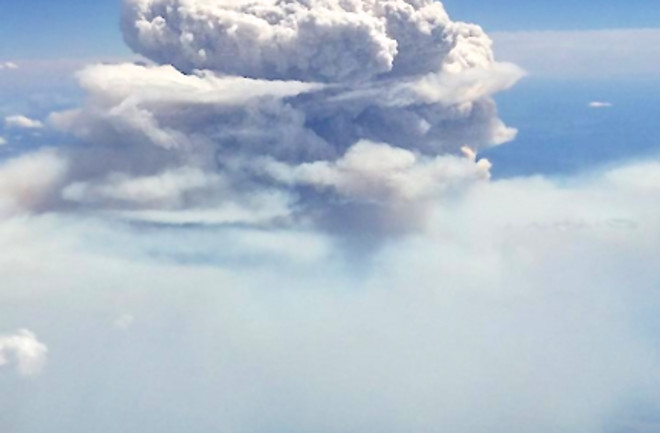 A fire cloud from the West Fork Complex of wildfires, as seen from a commercial airliner flying at 38,000 feet over Colorado yesterday. (Photograph: Courtesy Elizabeth Rothman) Yesterday, a friend posted to my Facebook timeline some photos she snapped from a commercial flight as it cruised at 38,000 feet over Colorado's raging West Fork Complex of wildfires. This one is so dramatic I thought I'd share it with you. It's a pyrocumulus, or "fire cloud." The intense heat of the inferno below has forced air to rise, leading to cooling and condensation of water vapor, and thereby forming a giant cloud that has risen to extraordinary heights. More about them in a minute. But first... The West Fork Complex, which consists of three wildfires, has consumed more than 75,000 acres and is zero percent contained. It is burning in steep terrain covered in beetle-killed trees, which makes for extremely difficult and hazardous conditions for firefighters. Unfortunately, the weather is not cooperating in their efforts. From InciWeb.org:

This is the fifth day in a row that the complex has been under a Red Flag Warning. Wind gusts reaching 50 mph were reported on the ridgetops with gusts to 35 mph at lower elevations. Relative humidity was reported in the teens dropping to single digits. Another Red Flag Warning has been issued for tomorrow.

I'm horrified by the ferocity of the fires. But I'm also fascinated by the science of fire behavior, as well as the phenomenon of pyrocumulus. If you are too, you must check out the pyroCb blog, from the folks at the Cooperative Institute for Meteorological Satellite Studies. They've got satellite images as well as pictures taken from the ground and the air. Here's a sample:

An aerial view of the West Fork Complex. (Image: pyroCb Blog, CIMSS) You might also be interested in the June 23rd entry in the "Smog Blog". They don't link to individual stories, so scroll down to find that post, which includes many remote sensing images. Lastly, Climatecentral has published a story that I wish I had written: "8 Images to Understand the Drought in the Southwest." It's got the remote sensing angle that is an important aspect of ImaGeo. And it provides important contextual background to the wildfire story.