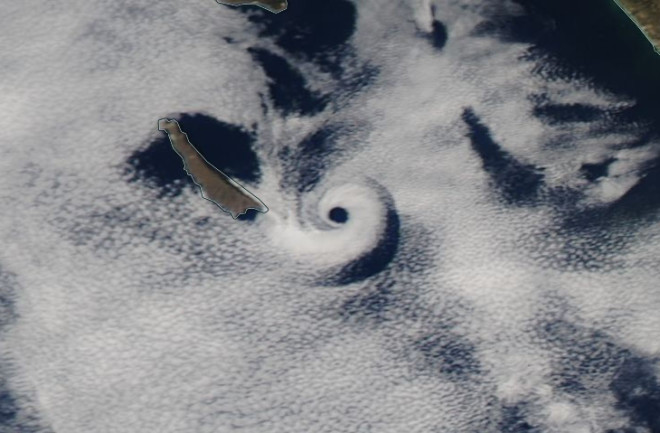 Satellite view of a von Kármán vortex near San Clemente Island off Southern California on Feb. 1, 2018. (Source: NASA Worldview) Check out this image captured Thursday by NASA's Aqua satellite. See that swirling vortex, complete with a clear eye? It has formed just off the coast of San Clemente Island to the west of San Diego. Here's what it looked like to an F-18 fighter pilot flying directly over the feature: https://twitter.com/WXMegs/status/959638888993173506 This is a classic von Kármán vortex, a cyclonic swirl of clouds that can develop when winds are diverted around a big obstacle such an island. The vortices form quite commonly off California as winds interact with coastal topography and the Channel Islands — in this case, San Clemente Island. I've written about von Kármán vortices before, most recently this past July, when a batch of them developed off the Southern California coast: Satellite imagery shows hurricane-like whirlpools swirling in the atmosphere along the California coast Here's a view of the entire life cycle of last week's vortex, from the GOES-East weather satellite:

Click the screenshot to play the animation. (Source: RAMMB/CIRA) And here's a more closeup view, also from GOES-East: https://twitter.com/weatherdak/status/959437501743190018 When you watch these animations, I think you can get a visceral sense that the atmosphere is much like a liquid. In fact, from the perspective of physics, both the ocean and atmosphere have fluid properties. And we have a common word for the constantly changing fluid properties of the atmosphere: weather!