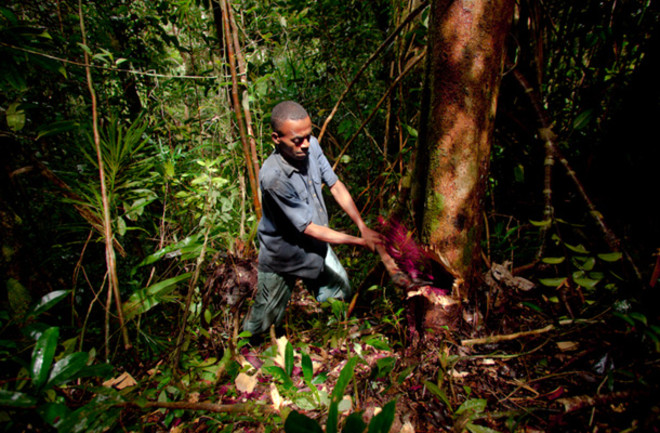 This photograph, taken in Masoala National Park, Madagascar, shows a Malagasi worker illegally felling a rosewood tree in UNESCO protected forest. Despite the risky work, dangerous conditions, and tremendous price of rosewood overseas, each worker is paid the equivalent of about four dollars per day. The wood is extracted deep from within the national parks and is financed by powerful local traders. The ancient and densely grained Malagasy rosewood trees are sought after for musical instruments and furniture. Plunder of the remaining rainforest stands for rosewood and ebony is wreaking ecological devastation in this unique habitat, home to around 14,000 species of plants, 90 percent of which exist here alone.

Photographer Toby Smith reports that after 4 months of continued unchecked extraction the labourers had to trek deeper into the forest to find stock. Smith met the worker in this photo previously, and asked permission to document him cutting a tree. One day this same worker suddenly appeared and beckoned Smith to where he and his partner were clearing the surrounding vegetation in order to swing an axe to cut down the tree. After making this image, the word was out that Smith was interested in tree-cutting, so Smith and his guide had to race back down the valley from there, their cover blown. The Environmental Investigation Agency will be using the photos Smith made in Madagascar as part of a case to prosecute those responsible for creating the international market for the illegally harvested woods.