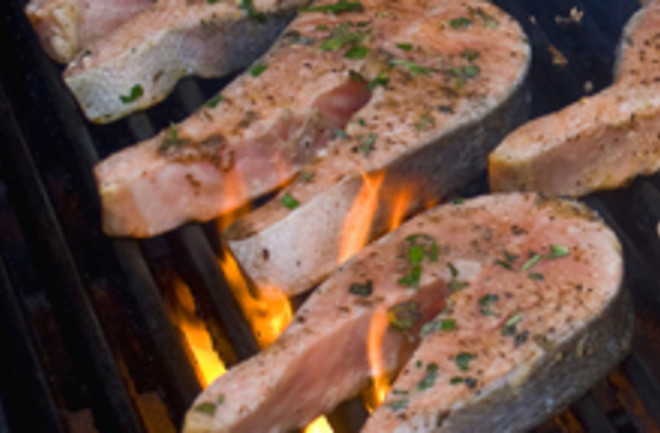 In about a week and a half, officials at the Food and Drug Administration must complete their final deliberations over whether or not to approve a genetically modified salmon as the first GM animal in the world sold for human consumption. It would seem they're leaning toward "yes." Last Friday, while the country was preparing to go on vacation, the FDA released an analysis (pdf) of the transgenic salmon created by AquaBounty Technologies of Waltham, Massachusetts, declaring it safe to eat and safe for the environment.

The AquAdvantage Atlantic salmon contains a growth hormone gene from the Chinook salmon that is kept active all year round by a genetic on-switch from a different fish, the ocean pout. Normally, salmon produce growth hormone only in warm weather. So with the hormone produced year round, the AquAdvantage salmon grow faster [The New York Times].

"Faster" is an understatement. A normal Atlantic salmon

requires about 30 months to grow large enough so that it can be sold at market. But a GM salmon with year-round growth hormone bulks up to market size in barely more than half that time—16 months or so. The FDA panel will meet for a few days beginning September 19, to be followed by public comment. The first part of the now-released analysis, the conclusion that the fish is safe to eat, has drawn some fire in places like The Guardian

. But the second conclusion, that the fish won't negatively affect the environment, has raised more eyebrows. AquaBounty promises to release only sterile female eggs and to allow fish farmers to raise the GM salmon only at inland locations; as a result the FDA analysis says it's extremely unlike the fish will escape and crossbreed with wild salmon.

But Wenonah Hauter, executive director at Food and Water Watch, a consumer-advocacy organization, disputed that conclusion."The FDA also says that [AquaBounty's] promises are potentially misleading because up to 5% of eggs sold for grow out could be fertile," Hauter said. "It seems very likely that there could be fertile salmon that are going to be put into commercial production." [Los Angeles Times]

If the agency opens the door the AquAdvantage fish, they could be opening the floodgates for GM animals on the cusp.

Other genetically modified animals are waiting in the wings. They include other types of fish, cattle that are resistant to mad cow disease, and the so-called enviro-pig, which was designed to generate more ecofriendly manure. [Technology Review]