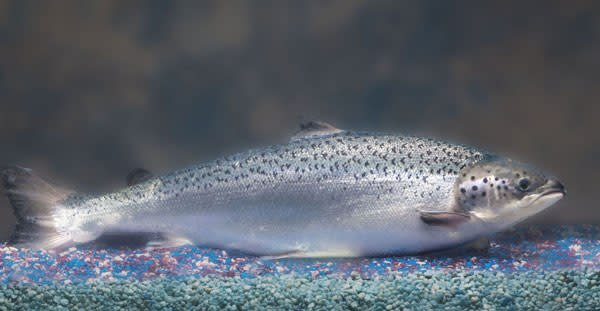 When most people say "genetically modified organism," they usually mean a plant---corn, perhaps, or an eggplant

. But that may soon change. The FDA has completed its analysis of the first genetically modified animal likely to hit supermarket shelves: the AquAdvantage salmon, made by Massachusetts-based AquaBounty Technologies, Inc. Thanks to some added genes, the salmon grows 2-6 times the size of a normal Atlantic salmon in half the time, promising some respite for the planet's heavily taxed natural fish stocks, a third of which are near extinction or exhaustion. Talking Points Memo's IdeaLab reports

that a source close to the review process says that the FDA's environmental impact statement, which looks at what effect the salmon will have on the environment and seems to be favorable, has been passed on to the White House's Office of Management and Budget. As always with genetically modified organisms, there are questions about how the salmon's manufacturers plan to keep its genes from getting loose in the environment. AquaBounty has developed a way to make the fish sterile, which would make spreading their genes quite tricky. At the moment, however, it only works on 98% of the salmon. Additionally, the company is only seeking approval for growing the fish in large, land-locked tanks with double-thick walls. While giant nets teeming with fish in the middle of the ocean are a sight more commonly associated with aquaculture, inland tanks make the risk of modified fish escaping much smaller. One hopes that if the fish is approved, though, the companies building the tanks make sure to avoid floodplains. Read more at IdeaLab