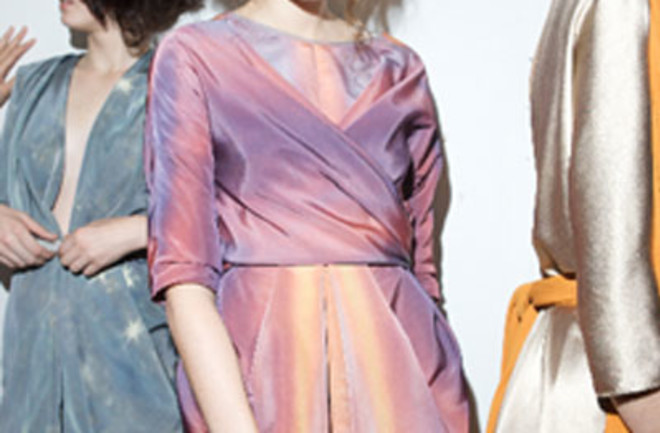 Fashion has been beefing up its environmental conscience (if not its models) over the past few years—and with good reason. The production, transport, and disposal of clothing is a serious source of pollution, with the textile industry holding steady as the third largest consumer of water, and the source of up to 20 percent of industrial pollution. This year, it's fabric dye that's getting the Green treatment. Coloring a pound of fabric can take up to 75 gallons of water, and a single dress or pair of pants can use up to 25 gallons. So what if we could dye all our clothes without water? That was the idea tackled by Colorep, a California-based technology development company that created a new way to color fabric using air rather than H2O. Called AirDye, the process applies non-plastisol-based inks within garment fibers, rather than as a layer on top (which is how it's done with water). This Fashion Week (yup, it's going on now—you can tell by all the hungry-looking Eastern European waifs roaming the streets) the AirDye system made its debut at the Costello Tagliapietra show, in which the clothes (see photo) were dyed almost entirely without water. Granted, until this new dyeing method hits jeans and T-shirts, your DISCOVER staff likely won't be testing it out ourselves. Related Content: Discoblog: New Jewelry Could Help Diabetics, Eliminate Syringes Discoblog: How to Make Solar Chocolate Chip Cookies on Your Car Dashboard Discoblog: Are "Climate Friendly" Food Labels a Terrible Idea?