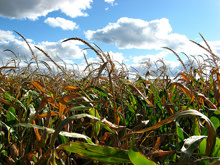 Is the Roundup Ready revolution coming to a close? In the early 1990s, agribusiness giant Monsanto introduced its line of genetically modified crops that could tolerate the pesticide Roundup, allowing farmers to spray it far and wide without worrying about damaging their product.

Now, reports are bubbling up about the increased resistance some weeds are showing to Roundup, which could be the source of great worry, as 90 percent of the soybeans and 70 percent of corn currently grown in the United States are the Roundup Ready varieties.

[F]armers sprayed so much Roundup that weeds quickly evolved to survive it. “What we’re talking about here is Darwinian evolution in fast-forward,” Mike Owen, a weed scientist at Iowa State University, said [The New York Times].

And for the environmentally-minded, here's something else to consider:

That threatens to reverse one of the agricultural advances bolstered by the Roundup revolution: minimum-till farming. By combining Roundup and Roundup Ready crops, farmers did not have to plow under the weeds to control them. That reduced erosion, the runoff of chemicals into waterways and the use of fuel for tractors [The New York Times].

For an in-depth take, and a historical reminder of how weeds have always evolved to thwart our means of killing them, check out DISCOVER blogger Carl Zimmer's post.