Every Day Wonders: Sun Dogs Over the Rockies 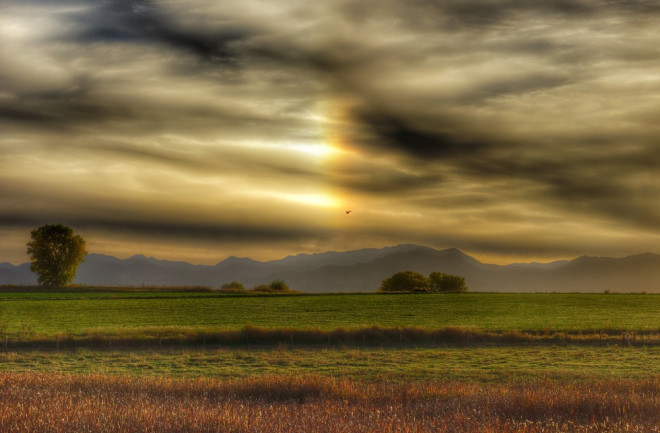 A sun dog, as seen in an HDR photograph looking west toward Boulder, Colorado on Oct. 7, 2014. (Photograph: © Tom Yulsman) As I was picking up Moe, my Labradoodle, from doggie daycare a couple of days ago, I noticed bright, rainbow-like features on either side of the setting sun. So I grabbed my camera, zoomed in, and took some shots.

Sun dogs and halo, Fargo North Dakota. (Wikimedia Commons) In the photo above, you're looking at a classic "sun dog," part of a halo around the sun caused by plate-like crystals in clouds. There was another sun dog on the other side of the sun when I shot this photo. (And btw, for a pic of Moe, an actual dog, go here.) If you're interested in a detailed explanation of what causes sun dogs, check out this excellent post, complete with diagrams. As for the photo, it's obviously not a naturalistic rendering of the scene. I've taken some liberties... When I raised the camera to my eye I realized that the very bright, multihued spot in the sky and the shadowed pastureland in the foreground would be problematic. That's because digital camera sensors (or film, for that matter) are not as good at dealing with scenes in which the highlights are very bright and the darker areas very dark. While the eyes and brain can handle scenes with such high dynamic range, cameras struggle. This issue was confirmed for me when I downloaded the photo to my computer. By exposing for the sun dog, so that some of the color in those bright highlights would be retained, the foreground wound up dark and rather murky. So I decided to apply a filter in post-processing — a high dynamic range, or HDR filter. (I did it, by the way, on my iPad.) The image above is the result. In traditional HDR photography, several images are exposed and combined to bring out the most detail possible in contrasty situations. When a filter is used, digital trickery is applied to make the very most of the data that's captured in a single image. For the photo above, I've applied much, much more HDR voodoo that I ordinarily prefer. But it had been a particularly trying day, and I have to say that this image made me smile. So I went with it. I hope you like it.