Even as Spectacular Storms Bring Relief to U.S. Southwest, Drought Conditions Persist — and Worsen in California 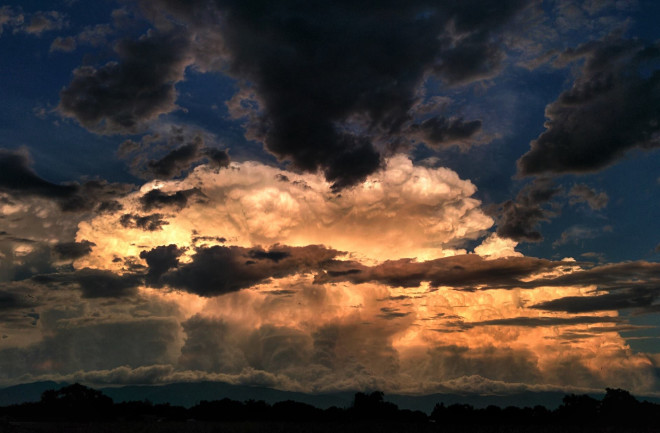 A massive thunderhead blossoming over the Manzano Mountains, about 30 miles southeast of Albuquerque, New Mexico, as photographed on the evening of Wednesday, July 30th, 2014 by photojournalist Jerry Redfern. (Photograph: © Jerry Redfern) After a profound lack of precipitation, parts of the Southwestern United States have finally begun to get some desperately needed relief. New Mexico, where the spectacular photo above was taken yesterday, has been suffering through four years of drought. And while the drought hasn't ended (not by a long shot), the storms have finally come — in very dramatic fashion. Overall, rainfall totals through July 29th have been twice normal in several New Mexico locations, according to the latest report from the U.S. Drought Monitor, out today. Albuquerque has accumulated 3.34 inches — a whopping 242 percent of normal. That has made it the wettest July on record for the city. Rainfall since late June has almost made up the precipitation deficit for the entire year, at least as measured at Albuquerque's airport. A friend and colleague, Jerry Redfern, who lives just south of the city, took the photograph above yesterday evening. The massive thunderhead blossomed just east of the Manzano Mountains. Jerry reports that it produced half-dollar sized hail and winds above 60 miles per hour. Thunderstorm activity in the region also produced spectacular displays of lightning:

Yesterday's storms began building late afternoon and early evening, and then really took off beginning around sunset. You can see them building and then sweeping across the region in this weather radar animation covering 6 p.m. Wednesday through 6 a.m. this morning (Thursday):

Southern Arizona has also benefited from recent rainfall. It's all part of a normal monsoonal pattern that typically gets into high gear in July. So far, this year's monsoon has been generous. But it still has not been enough to break the drought:

As the map shows, almost all of New Mexico and Arizona are still in categorized as being in moderate to severe drought.

Lastly, take a look at California. Unfortunately, the state has not shared much of its neighbors' good fortune. As the today's Drought Monitor report today sadly put it:

Increasingly, drought indicators point to the fact that conditions are not appreciably better in northern California than in central and southern sections of the state. In addition, mounting evidence from reservoir levels, river gauges, ground water observations, and socio-economic impacts warrant a further expansion of exceptional drought (D4) into northern California. For California’s 154 intrastate reservoirs, storage at the end of June stood at 60% of the historical average. Although this is not a record for this time of year—the standard remains 41% of average on June 30, 1977—storage has fallen to 17.3 million acre-feet. As a result, California is short more than one year’s worth of reservoir water, or 11.6 million acre-feet, for this time of year. The historical average warm-season drawdown of California’s 154 reservoirs totals 8.2 million acre-feet, but usage during the first 2 years of the drought, in 2012 and 2013, averaged 11.5 million acre-feet.

With the hottest and driest part of the year still to come in California, relief may be a ways off.