Abnormally warm sea temperatures are raising the risks for hurricanes, while the central and southeastern U.S. face flooding, and parts of the West are forecast to see heightened wildfire activity. 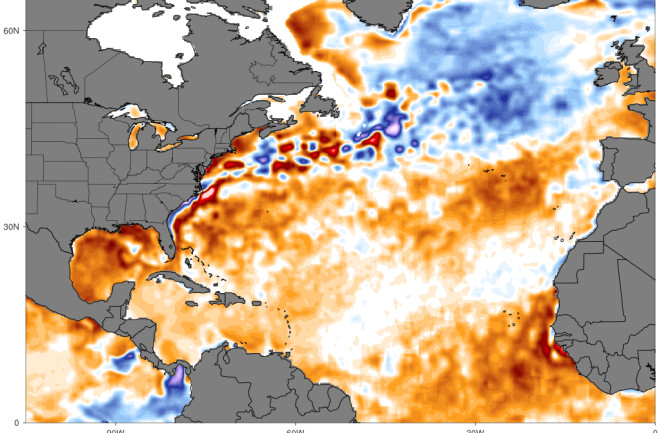 Sea surface temperatures in the North Atlantic and Gulf of Mexico were running well above normal in mid-March, and have warmed even more since then, raising the odds of an above-average hurricane season. (Source: Climate Reanalyzer)

An increased risk of natural disasters is the last thing we need in the age of COVID-19. But as we move into spring and summer, that's the unfortunate forecast — higher risks than normal for Atlantic hurricanes, Midwestern and Southeastern floods, and Western wildfires.

This comes at a time when emergency workers and other responders are already struggling to respond to the coronavirus pandemic. And like all of us, they are at risk.

In fact, this past weekend, a member of Colorado’s Unified Command Group at the State Emergency Operations Center tested positive for COVID-19. He may have passed the virus on to others at the center.

More broadly, years of devastating cyclones, floods, wildfires, winter storms, droughts and other disasters have threatened to deplete funding coffers. "What will happen now with the pandemic?," asks Lori Peek, Director of the Natural Hazards Center at the University of Colorado. "This is of grave concern." (In the interest of full disclosure: Peek is a colleague of mine at the University of Colorado Boulder, where the Natural Hazards Center is based.)

During the past decade, there have been 121 weather and climate disasters costing a billion dollars or more, according to the National Oceanic and Atmospheric Administration. The overall tally over the period: a staggering $809 billion. Tragically, these disasters also led to 5,252 deaths.

Of course, none of these disasters occurred during a time when responders were dealing with anything remotely like the current coronavirus pandemic.

Hurricane Dorian's 185 mph winds at landfall in the Bahamas on Sept. 1, 2019, put it in a tie for the strongest landfalling Atlantic hurricane on record. This image, acquired by the GOES-16 weather satellite, shows lightning in the eye of Dorian early that morning. (Source: NOAA)

Tropical cyclones have contributed significantly to the devastation. The past four years in particular have brought very active Atlantic hurricane seasons. And now, scientists at Colorado State University are predicting a fifth season of heightened activity.

"We anticipate an above-average probability for major hurricanes making landfall along the continental United States coastline and in the Caribbean," the researchers say in their extended range forecast of Atlantic hurricane activity. (Category 3, 4 and 5 hurricanes are considered major.)

In total, they forecast that 2020 will bring about 16 named storms, compared with an average of 12, with eight of those being hurricanes, and four being major.

A measure of overall activity called "accumulated cyclone energy" is also forecast to be significantly higher than normal. For the upcoming Atlantic hurricane season, the researchers estimate that ACE — an index combining the number of hurricanes, how long they exist, and how intense they become — will come in at a worrisome 150 percent of average.

"Coastal residents are reminded that it only takes one hurricane making landfall to make it an active season for them, and they need to prepare the same for every season, regardless of how much activity is predicted," the researchers warn.

The forecast for heightened hurricane risks is based on a number of factors, including a pattern of warm sea surface temperatures that are associated with above-normal hurricane seasons, according to Phil Klotzbach, first author of the Colorado State report.

Moving inland, NOAA is predicting another year of widespread river flooding, stretching from the Upper Midwest south through the central U.S. and across a large part of the Southeast.

Locations where there is a greater-than-50-percent chance of major, moderate or minor flooding during the spring period of March through May 2020. (Source: NOAA)

"NOAA forecasters predict widespread flooding this spring, but do not expect it to be as severe or prolonged overall as the historic floods in 2019," according to the agency's 2020 spring flooding outlook.

Although it likely won't be as bad as last year, "Major to moderate flooding is likely in 23 states from the Northern Plains south to the Gulf Coast, with the most significant flood potential in parts of North Dakota, South Dakota and Minnesota."

The risk comes from ongoing rainfall, highly saturated soils, and the likelihood of above-normal precipitation this spring.

The coronavirus pandemic could significantly hamper efforts to mitigate the flooding. As noted in a recent story in The Washington Post, "many Midwestern flood defense systems are entirely dependent on volunteers, who likely will be too sick or too scared to come out and build sandbag bulwarks or help evacuate neighbors."

The pandemic could also hamper efforts to contain wildfires in the Western U.S. and elsewhere. During March, drought conditions intensified and expanded across California, Oregon, Washington and Nevada, heightening fire risks in many areas.

In Northern California, seasonal precipitation and mountain snowpack have been about half of average as of April 1. "The snowpack is expected to completely melt off by early June, a full month earlier than usual," according to a report from the National Interagency Fire Center. Moreover, the vegetation and soils under the snowpack are dry.

"This means that there will be even less beneficial runoff in the late spring and early summer, and this will lead to an earlier date of critical fuel dryness at middle and high elevations," according to the fire center report. This means large parts of the northern Sierra Mountains will have higher-than-normal risks for significant large wildfires during June, and at higher elevations in July.

Risks are also elevated for central through eastern Washington and most of Oregon.

Years of bigger and more frequent wildfires have sent costs of suppressing wildfires soaring. In the five years between 1985 and 1989, annual costs averaged $371 million. For the period between 2014 and 2018, the average annual tally climbed to $2.3 billion. In 2018 alone, costs came in at a crushing $3.1 billion — an all-time high.

California's devastating Camp Fire is seen in this image acquired by the Landsat 8 satellite on Nov. 8, 2018. The image combines data in the visible and infrared portions of the electromagnetic spectrum. (Source: NASA Earth Observatory.)

Fighting fires and dealing with other natural disasters during this era of COVID-19 will stretch resources even more. But the problem goes beyond mere dollars and cents.

Responding to natural disasters often requires large groups of people to work together, often in close contact. To combat wildfires, for example, firefighters often gather in base camps where they share living space. As a recent release from the U.S. Department of the Interior notes, "Setting up an incident command post at a time when most people are living under 'stay at home' orders poses unique challenges."

And at the front lines, if one member of a 20-person firefighting crew tests positive for COVID-19, the entire crew will have to be quarantined.

"I was already really concerned about the health and well-being of responders even before the pandemic," says Peek of the Natural Hazards Center.

Some have already been stretched for long periods. She cites responders in Puerto Rico, who have been laboring to return the island to some semblance of normalcy after the devastation caused by Hurricane Maria in 2017. Since then, there have been 70,000 landslides, as well as earthquakes.

We can only hope that efforts across multiple U.S. federal agencies to plan for these unprecedented challenges will be effective.

More From Discover
The Sciences
Drought in Iraq Has Revealed an Ancient Mesopotamian City
Environment
Midwestern U.S. Forests Doubled in Carbon Storage During the Holocene
Planet Earth
Scientists Identify New Polar Bear Population Uniquely Prepared for Climate Change
Environment
A Wildfire in Arizona is Forecast to Send Smoke Streaming All the Way to the Great Lakes
Planet Earth
How Old Is the Oldest Sea Turtle?
Environment
New CO2 Record Prompts a Scientist to Ask, 'What's It Going to Take for Us to Wake Up?'
Recommendations From Our Store
My Science ShopDiscover STEM Kits
My Science ShopDiscover 2022 Calendar
My Science ShopStrange Science
My Science ShopElements Flashcards
Shop Now
Stay Curious
Join
Our List