Even as an unusual chill enveloped most of North America, the rest of the planet was plenty warm in April 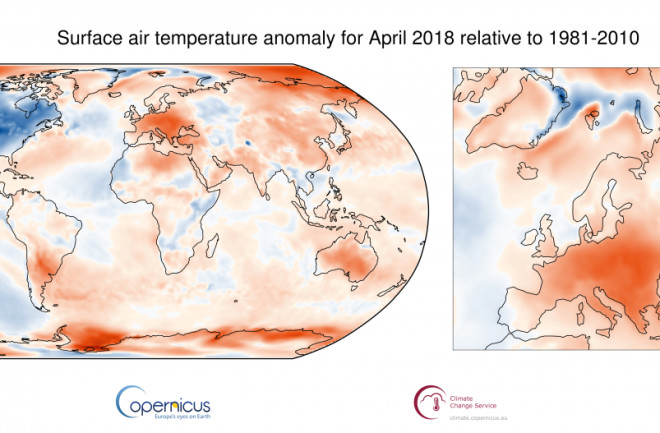 Temperature anomalies at Earth's surface for April 2018 relative to the April average for the period 1981-2010. (Source: European Centre for Medium Range Weather Forecasts, Copernicus Climate Change Service. Adapted by ImaGeo) Some regions of the world shivered last month. But as was the case in March, most of the planet continued to be unusually warm. You can see the pattern in the map above showing temperature anomalies for April, produced by Europe's Copernicus Climate Change Service. The chill was particularly pronounced over North America, as evidenced by the blue tones on the map. (This probably comes as no surprise to those of you from Canada or the eastern two-thirds of the United States!) Meanwhile, check out the red and orange tones over almost all of Europe. These are indicative of extremely warm April temps. "Following below-average European temperatures in February and March, April 2018 became, by a clear margin, the warmest April on record," according to the monthly report from Copernicus. Especially toasty temps also enveloped Australia, which experienced its second warmest April on record. Argentina simmered as well, thereby adding insult to injury: The country has simultaneously been experiencing an unusual drought that's projected to hit the country's soy and corn production hard. Overall, the Copernicus report pegs April 2018 as the third warmest for the month dating back to the beginning of their analyses in 1979. Their methodology combines information from weather observations with background information provided by a forecast model. NASA and NOAA will be releasing their own monthly reports soon, and it will be interesting to see how they compare to this one. Lately, the Copernicus monthly analysis has been running a bit warmer than these and other independent analyses, due to differences in methodology. Regardless, a few things are pretty clear: The overall pattern of temperature anomalies in the other reports will look very similar to this one. And despite differences in degree, all independent analyses concur that 2016 was the warmest year on record, followed by 2017 and 2015. They also agree on the overall rate of warming since 1970. The La Niña climatic pattern that had been helping to tamp down global temperatures is now fading. Some computer models are forecasting that La Niña's opposite, El Niño, will arrive by next fall. At this point, it's an uncertain forecast. But if El Niño does indeed arrive, it would help nudge temperatures up during the remainder of the year.

SEE ALSO: A shark-shaped, climate-shifting blob of warm water — as wide as the Pacific Ocean — is rising from the depths

If you follow these things, you might keep the map at the top of this post in mind. It shows that even if warming of the planet accelerates, you may experience something very different. This wouldn't mean that global warming has stalled, only that you happen to live in a place that's temporarily the exception, not the rule.