European Songbirds Served Up in Restaurants 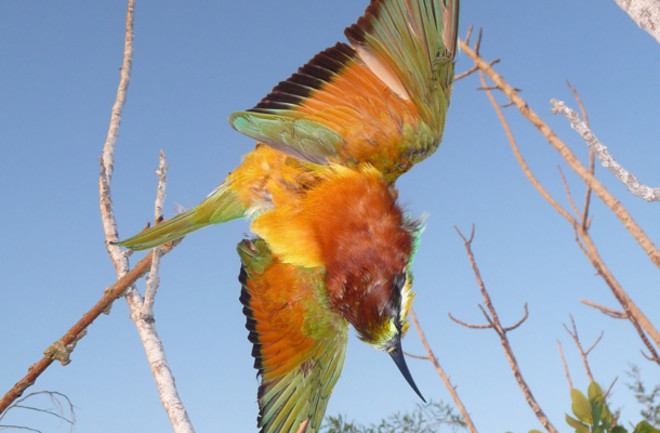 Alexander Heyd of the Committee Against Bird Slaughter (CABS) answered my questions about the above photo: "I took the photo close to the nature reserve of Cape Greco in southeastern Cyprus, in the morning of 2nd May 2009. This place is well known for lime-stick traps -- the poacher was never caught. We found illegally killed birds daily, but when I found the dead Bee Eater I was shocked. It was the first time I found this species on a lime-stick. The Bee Easter is my favourite bird -- I love Mediterranean countries and this is the first typical Southern Europe bird I saw when I got out of the train in Lisbon in the year 1989 ... my first trip alone, and my first trip in the South. As I stood there in the main train station in May, I heard this beautiful call -- and the Bee Eaters where flying around me. This was my first impression of Mediterranean wildlife. When I'm back in the South and I hear the Bee Eater's call I still remember that first trip, when I was 19 years old. And that's what I thought when I found the dead Bee Eater. And I was really angry ..." Lime-sticks are twigs covered in an sticky glue made by boiling plums. These sticks are placed so as to provide inviting perches for birds. These wild birds may be cooked as ambelopoulia, an illegal dish served locally. Many of the species caught by trappers are already facing extinction. Trappers in Cyprus work throughout the autumn migration, as well as during the spring migration, when their haul is especially damaging since it occurs before the birds have been able to breed. With its partner organizations, CABS operates operates bird protection camps during migrations in Italy, Germany, Malta, and Cyprus. Volunteer bird lovers from all over Europe participate annually in these operations, dismantling between 25,000 and 30,000 bird traps and nets.