This is the first in a series of guest posts by science writer Eli Kintisch, author of the forthcoming book

, and climate change reporter for Science

magazine. We've invited Kintisch to contribute regular guest posts at the Intersection on the topic; my take on his excellent book, due out April 19 from John Wiley, is here. 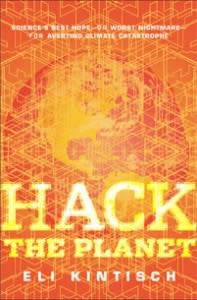 I was speaking to a contact of mine on Capitol Hill and we both agreed: there’s been next to no public controversy about geoengineering yet, but the storm from enviros and others is certainly coming. But the green community is split. Some think even coming up with voluntary rules to govern work on the controversial topic is a bad idea. Most of the big organizations, even if they have kept quiet up till now, think scientists ought to begin to understand what the unthinkable would entail. The ETC Group, an Ottawa-based civil society organization that’s been opposing various efforts in geoengineering since 2006, last week published an open letter opposing the upcoming privately organized meeting on geoengineering in Asilomar, California:

As civil society organizations and social movements working to find constructive solutions to climate change, we want to express our deep concerns with the upcoming privately organized meeting on geoengineering in Asilomar, California… The priority at this time is not to sort out the conditions under which this experimentation might take place but, rather, whether or not the community of nations and peoples believes that geoengineering is technically, legally, socially, environmentally and economically acceptable. Without any international consensus as to whether geoengineering is an acceptable intervention in natural systems, the Climate Response Fund and its Scientific Organizing Committee’s discussion about “voluntary guidelines” is nonsensical. The Conference organizers — almost exclusively white male scientists from industrialized countries — are presuming that they have the experience, wisdom and legitimacy to determine who should or should not be invited into this conversation.

One of those people invited to the conversation was Diana Bronson of ETC. But Bronson told me in an interview that ETC “is a small organization with limited resources” and would be unable to attend. Moreover, she said, since ETC opposed the meeting’s stated goal of creating such voluntary guidelines, “there’s no reason for us to attend.” (She also said that she had based her critique on the makeup of the meeting on who “she figured” would be attending, having not yet received the guest list. She well may be right about a racial/cultural weighting, but I note that in the same vein ETC attacked the Royal Society report last year on geoengineering before they had read a copy.) A number of prominent environmental groups support the conference being held, including the Environmental Defense Fund. Two officials from that organization, which helped organize the meeting, will be attending, along with Steve Seidel of Pew Center on Climate, and Tom Lovejoy of the Heinz center — both centrist, nonpartisan environmental groups. In addition, Dave Hawkins of NRDC will be there, as will Paul Craig of the Sierra Club. “We thought it was important to have engagement by the NGO community,” Margaret Leinen, head of the Climate Response Fund, told me. That group is the main sponsor of the meeting. (Friends of the Earth UK’s position on geoengineering research is here: I’ll analyze it in another post soon.) Blogger Tim Harper of cientifica is particularly unimpressed with ETC’s stand:

There’s nothing like the mention of geoengineering to get environmental groups even madder than putting a wasps nest down their trousers and beating them with a cricket bat, and for good reason. The idea that we could do something about climate change that didn’t involve re-engineering the political system would mean that we don’t have to live in caves, grow beards and ride bicycles. More annoyingly, some kind of techno fix would deprive some groups of a platform for the various other anti capitalist/globalisation/consumer agendas that have somehow got mixed up with sustainability.

Harper’s critique might apply to ETC — I’m still trying to understand their motives, and this document, their longest explanation of their views on geoengineering, helps a little. (The document, a pretty useful summary of events to date in this fast moving field, represents an evolution of the group’s views on one key aspect: Bronson told me last year that she felt research into the concept was ok, provided that it not involve field trials. Now they say research into geoengineering “takes money away from real solutions on the ground.”) But I don’t think it applies to the other mainstream environmental groups who have turned a wary eye toward geoengineering. As I say in Hack the Planet, environmental groups have been mostly quiet about geoengineering not for the ideological reason that they don’t want to fix the problem, but for strategic reasons. They’re worried that talk about geoengineering could distract from the solution even the biggest advocates of planethacking research want: immediate and drastic reduction of global man-made carbon emissions.