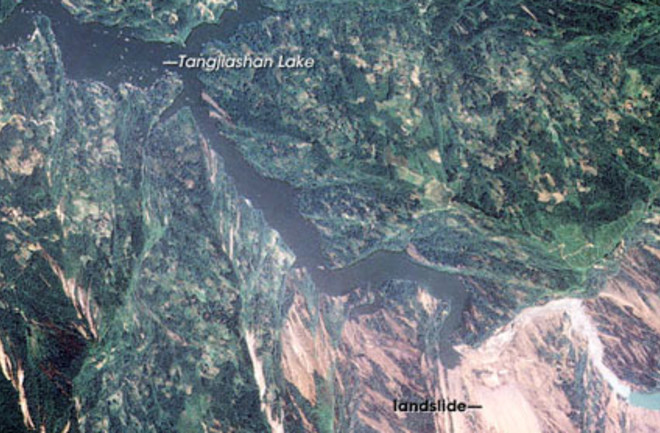 Aftershocks sent ripples of fear through China yesterday and today, as engineers and army officials struggled to drain the "quake lake" formed by the massive May earthquake, when rubble from a landslide dammed the Tongkou River in southwest China. The lake's water level has been rising steadily, and officials worry that another quake could burst the dam, threatening more than 1 million people downstream. The government has already evacuated 250,000 people. As the lake is in a remote mountainous region accessible only by foot and by helicopter, the army has airlifted in construction equipment, explosives, and personnel. The teams have already dug out a spillway to safely drain the water and reduce pressure on the dam, but observers say it's not working well enough. David Petley, a geography professor at Britain's University of Durham, said the situation at the lake appeared to be reaching a crisis level. "The teams on the dam are fighting a desperate battle now," he said. "The outcome is very uncertain."

The rising water level indicates the outflow was not fast enough, Petley said. From news photos, he said, there are indications that the top of the dam was holding, instead of eroding slowly as it should, while the channel farther down was eroding too quickly. That could potentially place increased pressure on the dam by suddenly sucking down large volumes of water, overwhelming the barrier, Petley said [AP].

The response teams are rushing to increase the lake's drainage, with the army taking aim on debris clogging the first spillway.

Soldiers are using anti-tank weapons to blast away rocks and mud preventing the water from getting to the channel. [...] Army official Fan Xiao Guang told the Associated Press news agency that troops were firing shells at close range, to "make sure the water gets through the channel." According to state media, the soldiers have managed to make the run-off channel wider and deeper, helping to reduce the water level in the lake, and are now working on a second drainage channel [BBC News].

While Chinese officials are still working to provide shelter and medical care to the millions left homeless by the earthquake disaster, the quake lake has become the most pressing concern. The dam appeared to be stable following the aftershocks of yesterday and today, but the teams seem to be losing their race with the rising water.

The water resources ministry said Monday the water level had risen by nearly [three feet] in a 24-hour period -- double the rate of the water flowing out through the drainage channels. About 6,900 cubic metres of water -- the equivalent of nearly three Olympic-sized swimming pools -- were flowing into the lake every minute, the ministry said. Troops working at the lake triggered 10 explosions on Monday to accelerate drainage, but only 3,000 cubic metres of water were now flowing out every minute, [the state news agency] reported [AFP].