The evolution of sea level height anomalies from early January through late May, as measured by the Jason-2 satellite. The tongue of red, orange and white colors stretching along the equator shows areas where sea level is above average due to anomalous warm ocean waters — a hallmark of El Niño. (Source: NASA Jet Propulsion Laboratory) |UPDATE:Since I posted this story yesterday, the U.S. Climate Prediction Center has released it's monthly diagnostic discussion of the ongoing El Niño, concluding that it is strengthening and will very likely continue into Northern Hemisphere winter. Please see below for the details. | Once regarded as indicative of an "El Wimpo", conditions in the Pacific Ocean are pointing to a stronger and stronger El Niño. The latest evidence that El Niño conditions are strengthening comes from the Australian Bureau of Meteorology. In a report released this week, the agency noted that abnormally warm surface waters have spread significantly in the tropical Pacific over the past two weeks — a hallmark of El Niño. As the report puts it:

It is unusual to have such a broad extent of warmth across the tropical Pacific; this has not been seen since the El Niño event of 1997-98.

That El Niño was a humdinger. Here's how a report from the National Climatic Data Center described that event:

The winter of 1997-1998 was marked by a record breaking El Nino event and unusual extremes in parts of the country. Overall, the winter (December 1997- February 1998) was the second warmest and seventh wettest since 1895. Severe weather events included flooding in the southeast, an ice storm in the northeast, flooding in California, and tornadoes in Florida.

We'll just have to wait to see whether the current El Niño follows a similar pattern. Suffice it to say that the Australian Bureau of Meteorology isn't alone in seeing a strengthening of this year's El Niño. |Update 6/11/15: According to the diagnostic discussion released by the U.S. Climate Prediction Center today, there is a greater than 90 percent chance that El Niño will continue through the Northern Hemisphere fall this year, and about an 85 percent chance that it will last through the 2015-16 winter. "Collectively, these atmospheric and oceanic features reflect an ongoing and strengthening El Niño." The CPC also notes that "the consensus of forecasters slightly favors a strong event . . . . relative to a weaker event." The agency cautions that making strength projections at this point is the most challenging aspect of El Niño forecasting. So this El Niño could ultimately wind up being moderate or weak, and it could even dissipate completely — "though at increasingly lesser odds," the CPC notes. | The Japan Meteorological Agency concurs that El Niño is strengthening. Sea surface temperatures "were remarkably above normal from west of the date line to the South American coast over the equatorial Pacific in May," the agency's report noted. Temperatures beneath the ocean surface were also "remarkably above normal" in the central and eastern tropical Pacific, which will help sustain the El Niño episode into the Northern Hemisphere winter. To get a visual sense of how El Niño has evolved since the start of the year, make sure to check out the animation at the top of this post. I created it using images from the Jason-2 satellite. These images show sea level anomalies, places where sea level is higher or lower than average. High sea level, depicted in reds, oranges and white, has expanded along the equator to the west of South America. This has occurred as warmer sea temperatures have caused ocean waters to expand. Here's another animation, this one showing the evolution of sea surface temperatures.

The evolution of sea surface temperatures between Dec. 25, 2014 and June 8, 2015. (Source: NOAA) Note the build up of warm waters in the eastern Pacific off South America — once again, a hallmark of El Niño. But El Niño manifests itself in more ways that simply sea surface temperature and height. It causes a weakening of the trade winds that typically blow from east to west near the equator. And that's exactly what has been happening, according to the Australia Bureau of Meteorology:

Trade winds have been consistently weaker than average, and on occasion reversed in direction, since the start of 2015.

Increased thunderstorm activity has also been observed near the dateline in the equatorial Pacific. From Japan's meteorological agency:

These oceanic and atmospheric conditions show more distinct correspondence with those observed during the past El Niño events than in the previous month. Based on the above observations, it is likely that El Niño conditions continue and are gradually strengthening in the equatorial Pacific.

No longer a wimp, the ongoing El Niño has already influenced the weather in North America.

The red-orange streak in this map shows an anomalously strong subtropical jet stream in the equatorial Pacific Ocean during May and early June. (Source: NOAA) El Niño typically causes the subtropical branch of the jet stream to intensify in the Pacific. As the image above shows, that's exactly what has happened. The red and orange streak stretching from Hawaii (at lower left) toward the Baja Peninsula indicates anomalously strong jet stream winds between May 1 and June 6, 2015. Here's how Daniel Swain explains the outcome, over at the excellent California Weather Blog:

. . . a stronger-than-usual storm track–driven by an enhanced subtropical jet stream–has led to extraordinary, record-shattering precipitation and devastating flooding in Texas and across parts of the Great Plains in recent weeks. This kind of late-spring pattern is strongly reminiscent of what we would expect to see during the early stages of a developing significant El Niño event, when atmospheric “teleconnections” (i.e. geographically remote effects of the warm tropical ocean) are not yet fully developed across the entire Pacific Basin/North America region.

These teleconnections are usually better-defined during the winter months, though there are significant implications for both the Atlantic and East Pacific hurricane seasons (decreased and increased activity, respectively). For what it’s worth, current model forecasts are keying in on the potential for the continuation of an anomalously active late spring pattern over California through the first half of June, with an active mountain thunderstorm regime and perhaps even some convective showers/storms occasionally at lower elevations.

With that in mind, I'll leave you with this: 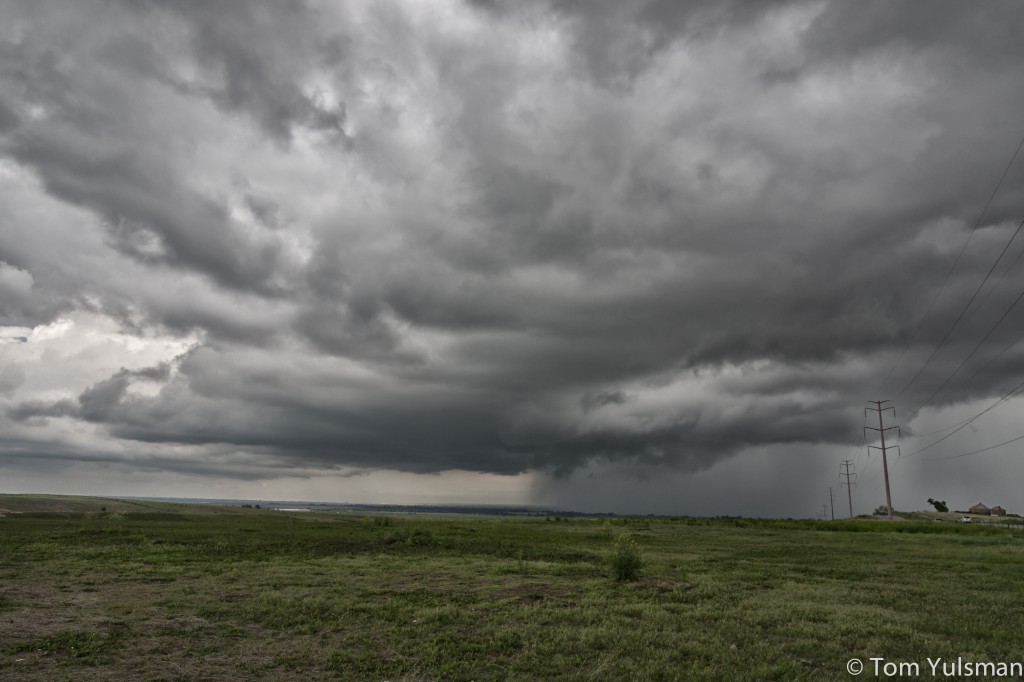 A sorm cell over the plains of Colorado east of Boulder on June 4, 2015. (Photograph: ©Tom Yulsman) Here in Colorado we've recently been hammered by storms that have been driven in part by developing El Niño conditions far away in the tropical Pacific. We haven't had it as bad as Texas. But like the Lone Star State, we did experience our wettest May on record. I shot the photo above on a relatively calm afternoon last week, as isolated thunderstorm cells were drifting north and east across the plains. This is a developing, humdinger of a story, so I'll be back with more soon.