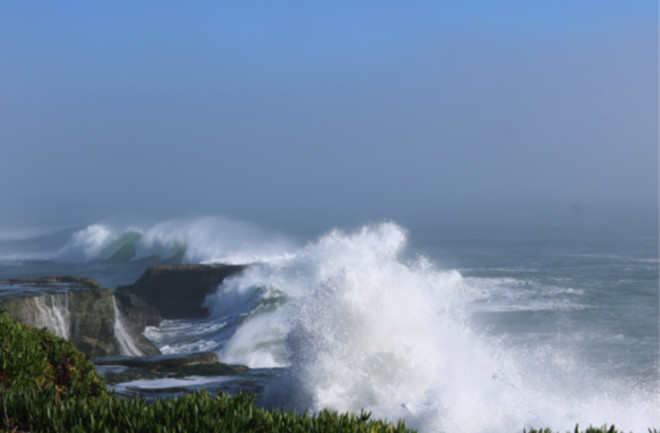 Large storm waves crashing on the rocks near Santa Cruz, California. (Credit: Christine Hegermiller, U.S. Geological Survey) Beaches and shorelines are locked in an eternal battle between land and sea. The struggle usually comes out to a draw — the rate of erosion is offset by the amount of new sediment deposited. But as weather patterns grow more erratic and storms intensify, our shores could begin yielding ground to the waves. The most recent El Niño event was one of the most energetic in years and brought powerful storms and punishing waves to the Pacific Northwest. While this may have been good news for a drought-stricken region, it also pounded beaches that protect coastal communities from erosion and flooding. A new study, led by researchers from the United States Geological Survey, assessed the work of the 2015-2016 El Niño and found erosion was 76 percent higher than normal levels.

The researchers surveyed 29 beaches in California, Oregon and Washington measuring sand and sea levels, topography, and wave energy. They compared their findings to data reaching back to 1993, and say that the sediment reserves have never been this far depleted. In a paper published Tuesday in Nature Communications, they implicate a variety of factors: stronger waves, changing storm patterns and a persistent drought failed to replenish sediments along the coast. While El Niño events of comparable strength have occurred, the unprecedented levels of coastline erosion could be due to changes in age-old storm patterns. The researchers say that storms have been steadily making landfall further and further north, altering the patterns of erosion. At blame are shifting weather patterns attributed to global warming, particularly the sub-tropical jet stream. Coastal erosion is all too real for one Alaskan village, whose residents this summer voted to relocate their entire town further inland to avoid being consumed by the sea. The ice that once shielded their low-lying island had gradually succumbed to warming seas.

A similar process could take place in the Pacific Northwest, where sandy beaches take the place of protective ice. Sediments are usually replenished during the summer by runoff from rivers, but the recent drought dried up those waterways and starved the shores of their yearly payload. To delay shoreline losses, communities at risk could rely on artificial beaches of trucked-in sand, as Florida has done. These measures are costly and fail to address the underlying issue, however. If the normal give and take between rivers bringing sediment and the ocean washing it away is not restored, the beaches will only continue to wither. Rivers in California are currently bursting at the seams, which offers some hope for beleaguered coastlines. A swollen Oroville River, near Sacramento, forced engineers to open Oroville Dam spillway for the first time, prompting the evacuation of nearly 200,000 residents. More rain is likely on its way. The sudden glut of rain is a welcome sight in California, which has been suffering through a years-long drought. This reprieve may be brief, however. Just as changing climatic conditions are pushing storms northward, so too are they affecting rainfall, and a recent study suggests that the California drought has only been intensified by a warming world.