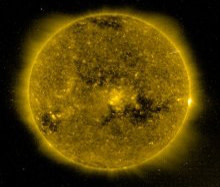 Researchers have discovered the our planet's atmosphere regularly expands and contracts in a short cycle of about nine days, and say that this "breathing" is caused by powerful gusts of solar wind. While researchers already knew that ultraviolet light from the sun can heat and swell the atmosphere, the discovery of short, cyclical fluctuations

“was a surprising finding” that wasn’t correlated with any variation in solar UV flux [Science News],

The breathing cycle seems to reach its peak when solar features called coronal holes are facing Earth. These dark spots in the sun's corona—a sort of solar atmosphere—are areas where the sun's magnetic field has been blown open by pressurized solar wind, sending the "winds" toward Earth at high speed. As the fast winds streaming from coronal holes approach Earth, they cause gases in our upper atmosphere to heat up and expand, then cool down and contract, changing the upper atmosphere's density [National Geographic News].

The findings, reported at the American Geophysical Union meeting, were obtained by sending satellites trolling through the Earth's thermosphere, the atmospheric layer that extends from about 60 to 300 miles above the Earth's surface. When particles from the solar wind

strike the atmosphere, the air heats up and expands to higher altitudes. As the satellites orbiting at those altitudes suddenly encounter thicker air, they slow down. Because the sun rotates once every 27 days and sported three low-latitude coronal holes for most of 2005, surges in solar wind swept by Earth, on average, every nine days [Science News].

Researchers say their new knowledge of the atmosphere's fluctuations will be a boon to space agencies and satellite companies that need to track the location of objects in the thermosphere, which hosts everything from the International Space Station to small chunks of space debris.

Understanding how the density of the atmosphere changes will allow for more precise predictions about the speed and location of all those objects, and will make it easier to prevent collisions. But atmospheric science expert Stan Solomon comments that

while the cycle on Earth is interesting, the really strange aspect of this work is what it says about our local star. "What's going on in the sun that's causing all this?" Solomon said. "It's not entirely clear. That part of it is quite mysterious" [Wired News].

The SciencesJupiter’s Largest Moons Might Have Formed From Dust