Earth's Core in a Bottle 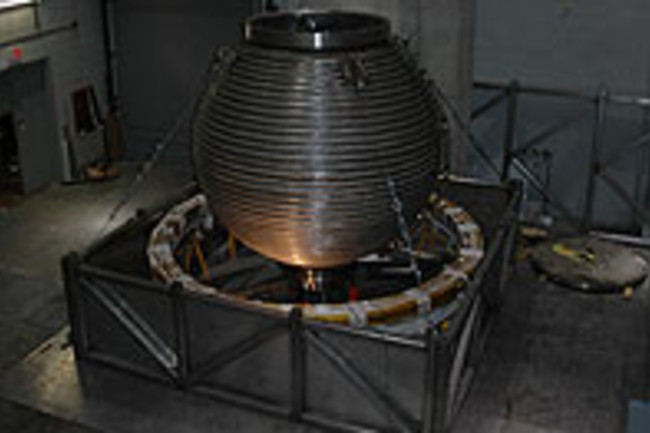 Courtesy of David Lathrop and Santiago Triana/University of Maryland

A journey to the center of Earth may soon be as easy as a drive to Daniel Lathrop’s lab at the University of Maryland. To understand the process that generates our planet’s protective magnetic field, Lathrop built the world’s most detailed physical model of where the action happens: Earth’s core. A 10-foot-wide steel sphere filled with 14 tons of liquid sodium stands in for the molten-iron outer core while a 3-foot-wide copper ball substitutes for the solid inner core. The whole contraption will spin four times a second to simulate Earth’s rotation.

According to theory, the churning of the molten iron outer core creates electricity, which, in turn, creates the geomagnetic field. “You get a feedback loop—a little bit of magnetic field couples with the motion to cause electrical current, which produces a bit more magnetic field, and it goes around and around,” Lathrop says. But nobody has figured out exactly how fluid motions in the outer core affect the magnetic field.

Using an earlier, smaller version of his device, Lathrop simulated the conditions around a black hole, learning that magnetic fluctuations help drag gas out of a safe orbit to a one-way trip into the hole. By adjusting the heat and rotation rate in the new 10-foot model, he hopes to gain similar insights into Earth’s magnetic field. For at least 160 years, our field has been weakening and shrinking; if the trend continues, the North and South poles might switch positions, temporarily exposing us to more of the sun’s energetic particles. Lathrop’s model should clarify whether we need to prepare for the worst.