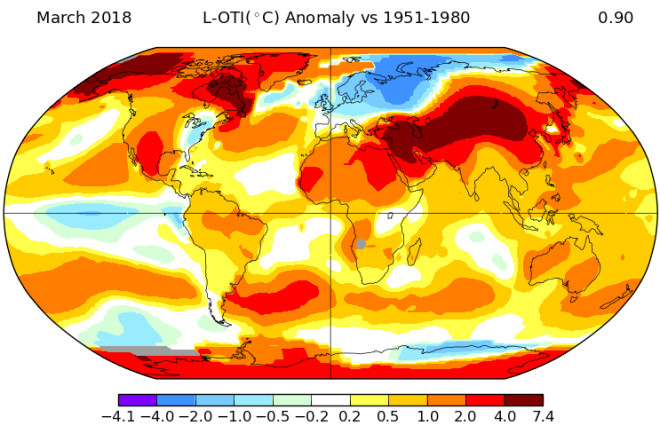 Global map of March 2018 temperature anomalies, relative to the 1951-1980 March average. (Source: NASA) Earth has been taking a very slight breather this year from the seemingly unrelenting record-setting global temperatures observed in the previous two years. And this past month was no exception. By NASA's accounting, March 2018 was the sixth warmest such month in records dating back to 1880. In an independent analysis, the National Oceanic and Atmospheric Administration pegged March as fifth warmest. And for the first quarter of the year (January through March), NOAA shows the period as sixth warmest. That doesn't mean human-caused global warming has gone away. According to NASA, the globe overall in March was 0.89 degrees C warmer than the average March for the period between 1951 and 1980. True, this was quite a bit lower than March 2016, the hottest on record, and March 2017, the second hottest. But keep in mind that global temperatures during those years received an extra boost from the warming effects of El Niño. Moreover, the temperature anomaly this past March — which was held down a bit by a lingering La Niña — was quite comparable with the years 2002, 2010, and 2015. All of these months were very close to 0.9 degrees C warmer than average. This is significantly warmer for all other March's in 138 years of modern record-keeping. And there's more to the story than that. During March of 2018, some regions were actually extraordinarily warm, while others shivered with much cooler than average temperatures. This added a bit of a schizo quality to the climate in March — as you can visualize by looking at the map at the top of this post. Check out the blue colors in Europe and much of Russia. They show just how cold those areas were in March. In fact, Europe as a whole, and several individual European countries, had their coldest March in five years, according to NOAA. Now, look a little to the south and check out that big, angry, blob colored in rust and red tone. This is indicative of extraordinary warmth over much of central and southern Asia. Several countries in the region set new national temperature records for March. To the west, large swaths of territory stretching from Greenland across much of northern Canada and encompassing Alaska and nearby seas also were much warmer than normal. So was Mexico and a fair portion of the southwestern United States. But if you happen to live along the U.S. Eastern Seaboard, I don't have to tell you how chilly it was! Lastly, head out into the Pacific along the equator. See that blue blob there? These are cooler than normal sea surface temperatures characteristic of La Niña. It is fading now. And here's one of the reasons climatologists are confident in that prediction: A shark-shaped blob of warm water as wide as the Pacific is rising from the depths toward the surface. In the next couple of months it should gobble up the remaining cool surface water. For the details, you'll have to wait for my next post, coming soon... Meanwhile, it will be interesting to see how the rest of 2018 fares once La Niña's cool sea surface waters are gone.