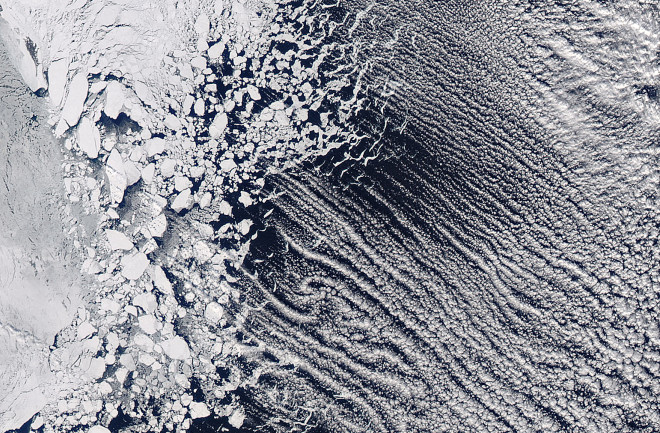 Sea ice and cloud streets in the Sea of Okhotsk, as seen by NASA's Aqua satellite on Feb. 8, 2016. For a Google map of the sea and surroundings, go here. (Source: NASA) As frigid air poured out of western Siberia and out over the Sea of Okhotsk two days ago, it helped create one of the atmosphere's more striking phenomena: long bands of cumulus clouds arranged in roughly parallel rows called "cloud streets." When I saw an image of the action captured by NASA's Aqua satellite, my mind's eye went to work. I saw that with some cropping to emphasize abstract patterning over immediately recognizable features, as well as modest enhancements to bring out detail, a beautiful work of Earth art (or "eARTh") could be created. The result is the image above. In addition to the cloud streets, my crop includes broken sea ice, which makes up part of the image on the left.

A schematic of cloud street formation. (Source: NOAA) NASA's Earth Observatory provides this excellent explanation of how these lines of clouds form:

Cloud streets . . . form when cold air blows over warmer waters and a warmer air layer . . . rests over the top of both. The comparatively warm water gives up heat and moisture to the cold air above, and columns of heated air called thermals naturally rise through the atmosphere. The temperature inversion acts like a lid. When the rising thermals hit it, they roll over and loop back on themselves, creating parallel cylinders of rotating air. As this happens, the moisture cools and condenses into flat-bottomed, fluffy-topped cumulus clouds that line up parallel to the direction of the prevailing winds.

Here's a broader view of the cloud streets over the Sea Okhotsk, showing the Kamchatka Peninsula jutting down from the upper right, and Sakhalin Island to the left:

Source: NASA To enhance the detail in the image, I used a processing plug-in for Photoshop called Sharpener Pro (from Google's Nik Collection). I did a bit of sharpening, and I enhanced both structure and micro-contrast. Sharpening enhances very fine features in an image. Structure works on a somewhat larger scale. And micro-contrast enhances the distinction between areas that are very slightly different in their luminance values. This tends to enhance micro-detail in an image. I hope you like the result.